Alas, We Lost Our Token Liberal 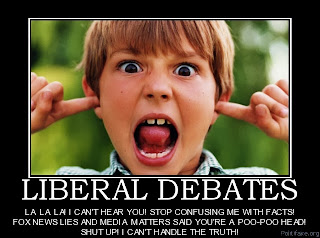 Dear Readers,
Cue "Taps"…we lost our token liberal yesterday.  A lively discussion of first, Obamacare, and then followed up by a discussion of the Detroit bankruptcy did him in.

You see, in the comments section, you, the reader state your position.  That is all fine and good.  But if you can't back up your points with solid facts, I'm going to challenge you.  And, as you know, while I am always trying to win a popularity contest, I won't concede my principles in order to do so.

So yesterday when I offered criticism of Obama's insistence on an expensive Cadillac health plan, when Americans prefer a more affordable and less subsidized Chevy, our friend Jerry accosted me for assessing blame….to him, healthcare is just what it is, and if it's expensive and wasteful, so be it..that's the price we pay for maintaining the wonderful nanny state.

When I then offered a laundry list of big government inefficiencies in both the old, and the new healthcare system our friendly liberal offered to agree, but only with the concession that those nasty Republicans are largely responsible for most of it…without even a nod toward Lyndon Johnson's $100 trillion dollar Great Society Program that set us on the road to bankruptcy.

Our friend then suggested I move on and perhaps write a blog about the Detroit bankruptcy.  I then related that there was already a blog on that one and provided a link to my July blog on the Detroit disaster and what it means for the average Joe Taxpayer.

Well Jerry read that one got downright irritated; here I was assessing blame on that long line of Black corrupt Detroit mayors who took the city for all it was worth.  "Again the blame game" proclaimed Jerry, then offered some weird correlation between Detroit corruption, food stamp cuts and Walmart bellowings.

Since I couldn't make a hell of a lot of sense from such non linear thought, I told him so.  Perhaps I was too harsh.  But, alas, when one is debating a liberal, inevitably you are going to reach a point where facts are essential, and that's something they nearly always are incapable of providing.

Folks, you have no idea how nasty my email traffic is…most of the most nasty will never leave a comment in the comments section…they reserve those for a private email.  I simply let them roll off my back.  In the rare instance where they make even a partial point I will engage them in several email exchanges..most often to no avail.

My "nicer" readers disagree with me often..and that's fine!  And I often acknowledge the verity of their points as well!  But, if you're going to make a point be prepared to back it up with facts and figures and specific instances…google lives so there are no shortages of source material to back up your point…if there is one.

Anyway, sadly, Jerry left us yesterday, leaving only a curt "I'm gone!"  I had great hopes for Jerry; he seemed to be an intelligent, well thinking and kindly sort who was ready to engage in civil debate. Alas, reality got the best of him.  Reality is something that requires rational thought; it cannot survive in the realm of random emotions.  The fog of liberalism is so much more comforting that the heat that emanates from laying the "facts" out in the sun to dry, and destroy the mold of confusion.

So, if any of you know a liberal just itching to cite facts and figures and fight the good liberal  fight, please invite him to the party.  We are all just a little poorer today as our diversity has suffered.
Posted by A Modest Scribler at 2:00 AM

I am a conservative living in San Francisco. Everyone I know is a liberal. I enjoy watching Fox News. Every time I suggest watching it to a liberal, they say it sucks. I say to them they've never watched it. They say they have. I know they haven't. They think watching clips of it on Jon Stewart is a fair judge of it.
End of story, end of discussion.

So true, anon…liberals simply can't stand up to logic…if they did their philosophy would fall apart.

The saddest part is that our whole system was based on the debate and our ability to have a "productive" argument. Everyone is too childish to accomplish that now. I was very impressed with Jerry as he presented well thought debate here and I did enjoy the back and forth. I learned some as well, thank you Mr. S and Jerry. Too bad, I hope he reconsiders as the loss of the debate in the country is killing us.