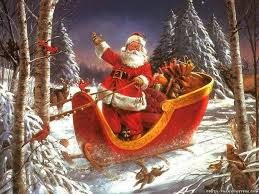 There's been a lot of talk lately about Santa Claus, the national conversation driven by an essay written by a liberal Black blogger who was advocating that the nobility of Santa Claus can only exist if he was Black.  I'll let that controversy die a natural death.

Instead, I'll borrow from a dear story posted on the internet this past week.  It was the personal account of when a young boy learned from his big sister that Santa Claus was not just dead, but that he had never existed.  The young boy was so traumatized that he fled to his straight talking Grandma for the truth.  The Grandma quickly disparaged the false rumor that Santa didn't exist; she put the kid in her car and they drove downtown.  She then pulled up in front of the local retail store, pulled ten dollars from her purse and handed to the young boy and told him to go into the store and buy a Christmas gift for anyone he wished.

The eight year old boy had never been shopping alone before and was a bit excited over the prospect.  He thought of all those in his family whom he might buy a gift for.  Then he remembered a little dorky kid in his class at school; a kid who didn't go out and play at recess because he didn't have a coat.  So the kid bought a nice, warm hooded coat for his fellow student in need.  When he took the coat up to the cashier to pay for it, the cashier looked at him and asked if this was a gift for someone.  The kid nodded yes.  She then smiled, boxed the coat up and, not receiving any change, the kid went back to the car with Grandma waiting.   Grandma then removed the price sticker and placed it in her bible and drove her grandson over to the needy child's home to deliver the coat.

When they arrived at the boy's home, they pounded on the front door, then ran and hid in the bushes.  When the needy boy came to the door and found the package his face lit up with joy.  Grandma and grandson then left and, as she drove home, she told her grandson "you see, Santa needs help and you just helped him so how could it be that Santa doesn't exist?

Years later, long after Grandma had passed, the now grown man, opened up his Grandma's bible and found the old price tag on that gifted coat; it read $19.95.  The young man, who forever would now believe in Santa Claus, realized that there were many more than just himself who played "Santa" on that long ago day.

I think this was a lovely story.  It clearly illustrates the true meaning of "Santa" and reminds us all of our own role in perpetuating the Santa legend.

This year I've played Santa quite often.  Along with so many of you I helped Betty and Jerry Craddock recover from the tragic burn out of their home.  I contributed all year to St Jude's Cancer Hospital for Children and to the Humane Society.  And I buy any pink package that appears during breast cancer awareness month and can't say no at the register when asked to donate another buck toward the woman's cancer fund.

Just this past week I received an email from one of our dear readers who contributed a gift pack of natural soaps and lotions to the Craddock family.  I don't know whether she would want her name mentioned so I won't.  But it is this type of giving that keeps Santa alive for us all year long.

So, dear readers, fellow "Santas"….let me wish you a very Merry Christmas and a Happy and prosperous New Year!

May you have a most beautiful Christmas and a very happy New Year! Thank you for your writings. Please know that they are very much enjoyed ~

Carol, I'm wishing the same joy and beauty for your own Christmas. You certainly know Santa well, done you? :) And I've said many times, my writing would mean nothing if it didn't touch someone in some way. Merry Christmas.

MERRY CHRISTMAS to all of my fellow followers of our favorite blog. Please share these good writings with friends and family. Let's light up his tally board and let him know that we appreciate it very much. He doesn't require much but some awesome recognition might just make him a very JOLLY old chap. 🎄

Well, thank you very much Ralphie…just for that i hope you finally get that Red Rider BB gun! :)