Yes, Virginia; Santa Is A Democrat 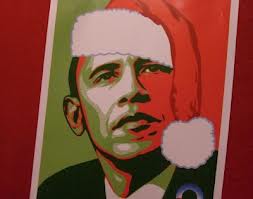 Dear Virginia,
Thank you for your letter which asked me if your friends are correct, if indeed there is no Santa Claus.  Dear girl, here's what I have to offer you.

Virginia, your friends are wrong.  Most probably they are Republicans.  They have been affected by the skepticism about our ability to continue giving out welfare checks and unemployment checks and Food Stamps and even free cell phones because of our $17 trillion dollar national debt.

My dear Virginia, your friends are blinded by math.  They try to insist that 2 + 2 must always equal 4.  They are wrong sweetie.  We can make 2 + 2 equal anything we wish to make it equal.  As just an example dear, I won 107% of the vote in some black neighborhoods in Philadelphia when no one said that's possible.  I did the same thing in Cleveland and Chicago and Baltimore and Detroit!  All we needed to do was to toss 200 voting auditors from the polling places, and "voila", victory was mine!

How could you ever doubt the existence of Santa Claus? , dear Virginia.  When I forgave those who foolishly took out more mortgage debt than they could afford wasn't that just like Santa?   When I started "Cash For Clunkers" and gave anyone who was driving a big SUV gas hog a $7,000 dollar check to buy a new car wasn't  that like Santa?  When I gave out $400 million dollars to Solar Company executives who were campaign donors, and who later went bankrupt, wasn't that just like Santa Claus?

Didn't I give out free cell phones to welfare mothers, dear girl?  Didn't I sign a bill that forgave student loan debt if our students hadn't paid back their loan after 20 years?  Didn't I give free medical care (including illegal immigrants) to 30 million Americans who choose to buy IPODs and big screen televisions over paying their health care premiums?

Be careful, Virginia.  Those who don't believe in Santa Claus always pay the price.  Those old people on Medicare have outgrown their belief in Santa Claus so I put sand in their stockings and took $716 billion from their Medicare program to pay for all that free Obamacare!

No, I don't live at the North Pole.  I live at 1600 Pennsylvania Avenue in Washington D.C. but, like Santa, Ms Claus and I love to travel around the world!  In fact we spent $100 million dollars in four years flying to Spain and France and Britain and Hawaii and Martha's Vineyard!  Though we don't travel in a sleigh we have some really big airplanes and helicopters to take us where we need to go!

My dear Virginia, I'm so glad so many Americans are just like you; they believe in Santa Claus and no amount of rational thought, no amount of logic shall ever force you to "do the math"...or stop you from believing that you can always and forever get "something for nothing".

Some of my biggest fans have called me a "savior" and deemed me "saintly".  Well, Virginia, of course I am!  I am St. Nick, alias Santa Claus!

Always keep believing in me, sweet Virginia!  And don't ever stop. For if you do, you're going to see a really big tax bill when you're about 35 years old!

Santa (BHO) Claus
Posted by A Modest Scribler at 2:00 AM

If you switch a couple letters that letter is totally true: Santa Claus becomes Satan Claus.

Proof positive once again!! Liberals are lyin' bastards and need to be irradiated from the planet. Merry Christmas, Santa

I love your posts. but for correctness sake.. the solar FIASCO was 400 million dollars. not 400 Billion. the "b" for the "m" represents a huge huge difference. you know that :)

but indeed, I am tired of people getting something for nothing and giving benefits to illegals. I am the Army retired officer. best regards.

Anon, thanks so much for the correction! How embarrassing. Hope you know that was a typo! I really appreciate being corrected; sometimes I find them myself months later and then i'm really embarrassed!

The solar fiasco was a lot more than $400 million. Solyndra alone took $750 million and my congressman, George Miller, saw to it that his son was guaranteed 1.2 billion dollars for a phony solar company. There also were more than a few obama campaign bundelers who were rewarded with several hundred million in solar and wind money. It does approach several billion, unfortunately.