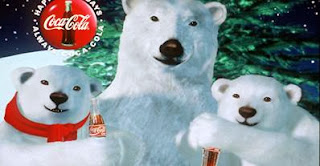 Happy Holidays, dear reader.  We learned this week that we won't be seeing as much of the polar bears in those Coke commercials this season.  It seems Coke has severely trimmed their commercial ad budget and reallocated those millions toward hurricane relief in the Philippines.  Within hours of that horrific storm, Coke had dispatched every available Coca Cola truck and driver into neighborhoods with Coke and bottled water.

Call it smart marketing, or call it humanitarian concern but Coke always seems to be in the forefront of efforts to get their brand out there!  And folks, that's why Coke continues to rule the "soda roost".  We elders can still remember when Pepsi tried to cut into Coke's market share by offering "12 big ounces" when Coke was being retailed in those cute little 8 ounce bottles.  Didn't work.

And as the years went by, and Pepsi became a huge conglomerate, with KFC and Taco Bell and Pizza Hut and other fast food franchises they still couldn't move Coke to "number 2".  It's hard to conquer an American icon and that's what Coke has been for 130 years.  Of course, they no doubt got off to a quick start by having the original formula spiced with a bit of cocaine.  Everyone felt just a little better after drinking a Coke back then!

But it has always been Coca Cola's marketing that has kept them number 1.  I remember reading a business case study of how Coke and Pepsi entered the India market.  Pepsi put a lot of money into incentivizing store owners to give them shelf space.  Then Coke one upped them when they gave every merchant a refrigerator so that they could sell cold Cokes.

And who can forget that catchy little song from the 70's where a whole mess of hippies were standing in a flower laden meadow singing "I'd like to buy the world a coke"….hell, the hippies were pissing in their pants to drink coke…"peace, baby!"

Last year I read a book called Naked Economics; it detailed various business success stories and, again, Coke shone in the limelight.   It seems that, days before the Berlin Wall came down, Coke had already commandeered every one of those bright red Coke trucks in Western Europe and then plowed into those Eastern Block countries handing out Cokes even as they were rejoicing in the streets!  Nothing like a huge American icon joining in a happy celebration, huh?  Ya think that might sell a few cokes?

So, if you see a little less of those cute polar bears this Christmas season, know that it's for a good cause; good for those poor folks in the Philippines and definitely good for Coke!
Posted by A Modest Scribler at 2:00 AM

Rum and coke just doesn't work with Pepsi! McDonald's also has an interesting story about their start up in Russia. First they had to teach the workers to smile!

Never thought about the Russian business, Jerry. Makes sense though. Russians have had little reason to smile so then don't.

McDonald's in Russia is a very interesting story and you would like it! Seriously, they started a McDonald's College, teaching the how to be polite and courteous and, no such thing as ketchup in Russia so they created those factories and factories to make paper products and even new farms to grow potatoes!
Probably McDonald's, Coke and the Beatles were the undoing of the Soviet Union! A big PLUS for free enterprize, huh?

Coke is better than pepsi, especially the bottled Coke from Mexico.

Sounds fascinating Jerry…having to build an infrastructure where there was not one. Most of the third world was able to get around building a hard infrastructure for phones simply by going straight to cell phones…if they didn't have cells it would have been costly.

Craig, I agree. I usually don't drink the sugared coke or the Mexican corn sugar coke but both are better tasting that diet in cans. I make an exception at Christmas and buy the bottles of Mexican or sugared bottles and they are great.

I don't think I could trust things bottled in Mexico, especially if they use their water (maybe just biased). Still prefer Pepsi on the occasion, I think it's the color of the can that attracted me more.

Interesting note, last time I read, Coke won't fully enter India since they require you give them all their secret ingredients before they let you sell there. Oh and merry belated Christmas Mr. Scribbler and and early Happy New Year.