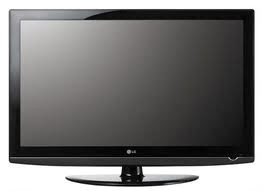 Were it not for "gifting" I would probably still be watching MASH and Perry Mason re-runs on my trusty old off brand analog television.  But, about 7 years ago my family gave me a 46 inch Visio television.  This was before today's light weight models made it easy to lug it in the house and set it up; the Visio weighed over 100 pounds and was a real "motha" to lift up and maneuver to set the damn thing up.  And once done, frankly I couldn't see a huge improvement in viewing quality.

Being technology challenged, me and the Visio never quite became friends.  The remote operation was confusing and, once a week or so, I pushed a button that left me without television for a day or two.  Usually I corrected the situation by banging every button on the remote, then throwing it a the nearest wall.  And using the remote soon proved to be the only way to turn the damn thing on.  The buttons down the side of the TV quit working about six hours after the warranty ran out on me.

Alas, two weeks ago the remote gave up on me as well.  It had been proving stubborn for months before that.  When I hit the power on button I would get no response.  Then I would begin the tiring process of "finger adagios" across a broad spectrum of buttons until, after ten minutes or so, the damn thing would finally power up.  Sadly, even the mad random button pushes fail to power up the Visio so I began scouring the Black Friday ads for a replacement TV.  I finally found a great deal on Amazon; a 46 inch, LCD for $329.

My new television arrived within a couple of days and I dragged the huge box into my living room and, fearful of the always maddening setup procedures, I let the new TV sit there for a day or so.  Finally, missing my Wanted Dead or Alive re-runs, I took a few tentative steps toward the enormous box, scissored off the huge plastic bands holding the thing together, then became amazed at the ease of lifting my new 25 pound large screen TV out of the box.  And it just kept getting better!

Where the monstrously heavy Visio required heaving half of that 100 pounds over my right shoulder, then straining to reach around and connect DVD and Roku and antenna, my new Chinese prison made TV was easy to flip around, make the connections, and flip back around to finish the set-up.  I then inserted two triple A batteries into the remote and the magic began!

I powered the new TV up and it immediately defaulted to a set up screen.  And wonder of wonder, this wondrous new TV had features I had not dreamed about!  For example, using a demo of "The Exorscist", (the little girl spewing out green vomit), I was able to set up a quick flash feature that caused the screen size to graduate from 36 inches to 40 inches and then to the 46 inch full screen mode!  So, as the little girl began spewing green satan vomit, the screen size jumped to three different viewing sizes, creating the appearance that the green gruel was coming right at you!

I then found the "alternative reality" feature which is marvelous!  You can program the TV so that when any politician appears on the screen, the program immediately switches to a scene where a dozen Sports Illustrated bikini-clad beauties are frolicking in the aqua blue waters of the Bahamas.  As soon as the politician is gone it then reverts to regular programming!  Magic!

But perhaps the feature I love best is found in the audio settings.  I have set this TV up to default to "noise cancellation" mode whenever it detects a spouse's voice.  If the spouse berates one for couch surfing three football games the noise cancellation mode gears up and you can't hear a thing she says.  Works for everything; "take out the trash" or "the yard needs work" simply dissolve into calming sounds not unlike what one hears when one puts a seashell to one's ear.

So now I dwell in TV Nirvana!  Isn't technology wonderful?
Posted by A Modest Scribler at 2:00 AM

Is the company that made your TV traded on Wall Street. I think I'm about to be rich!!
I too, have a Visio, it's been just a great tv for a few years now. Beautiful picture but none of those first class features you describe. Time to upgrade I think.

Probably listed on the Hang Seng index, my friend. Merry, Merry to you as well!