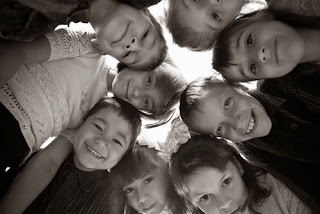 I was reading the Sunday paper this week and came across an article in Community Voices about the Peoria Sunset Lion's Foundation and their efforts to ship Christmas boxes to Arizona troops from Luke Air Force Base and Yuma and have now included both the Arizona Air and Army National Guards deployed to isolated places around the world.

They ship basic items like soap and toothbrushes and toothpaste and skin lotions and gum and nuts and dried jerky and such.  I was reading the piece, thinking I may shift to this organization to donate items...when I came across a blip of words that misted the eyes and constricted my throat.  The chairman of the committee spoke about a significant number of orphans who, never adopted, joined the military just so they could have someone to belong to.  But, because they have no family, they don't have that logistical support that the average G.I. Joe does....a family that will send cookies and letters and Christmas cards.

And I knew that to be true.  When I was in Air Force basic training our greatest joy was mail call.  Every evening when all of our duties were done, we would all gather around for mail call.  Some days we received many letters and some times we received none.  On those days with no mail we were saddened and would hope tomorrow was better.  One day I noticed that two guys on our flight never joined the group for mail call; instead they would hang around the bunk, or sit on their foot locker and seemed to be unconcerned about not receiving mail from home.  I later found out that these two were orphans and had no one to correspond with.    One of them, over a cup of coffee at the BX cafeteria told me that he was part of a special program the government ran to accelerate orphans in the late teens, orphans too old to be an attractive adoption candidate, into high school degrees and channelling them into the military.  I never knew how many orphans entered the military from orphanages but their numbers must have been significant because I met a few of them.

In Vietnam you could usually tell the guys who had no families.  Most of us had pics of our family and or girlfriends taped to the back of our locker in our hootch.  Most of us had "care packages' from home, tapes, cookies, candy, recent photos from family and packs of kool-aid to mix in our canteens.  These guys had nothing from home.

I would not personally get to know a "service orphan" until I attended Officer's Training School.  It was there that I met Bob, a mustang like me, someone who had already served several years as an enlisted man.  Bob was in my training flight and one night we got to talking and he told me about his youth and being raised, and never adopted in an orphanage.

But Bob's story was extra special.  He told me he left the orphanage at 18, enrolled in a trucker driving school and got a job as a coast to coast trucker.  Bob had always missed not having family and he told me he was driven to find his birth mother and find out why she abandoned him.  When Bob raised some spare money he hired an investigator to find his mother.  Bob knew he was born in Iowa but that was all they would reveal to him.  Somehow, perhaps through bribery, the investigator hit pay dirt; he found out the mother's name and even provided an address where the woman was living in Elko, Nevada.

Bob was so excited to get the information that he could barely contain his excitement.  He held no animosity toward his birth mom; he just wanted to see her one time, ask about why he was surrendered to an orphanage and just have a little closure.  So Bob wrangled a West Coast delivery via I-80, with a stop in Elko.   Sadly, the reunion did not go as expected.  When he arrived at the address given he was met at the door by a woman in her forties.  When Bob blurted out his greeting and the reason for the visit the woman denied that she was his mother and denied knowing anyone by the name given.  Bob was disappointed and returned to his motel room.  He laid down for a nap before getting back on the road, when the phone rang.  It was the same woman he had met at the door earlier.  She confessed to Bob that she was indeed his birth mother but when Bob begged to return for a brief visit she refused.  After pressing her hard, Bob learned why she didn't want to meet him.  She was working as a prostitute in an Elko bordello and didn't want to go back and revisit "old sins".  Before they ended their phone conversation she did tell him how he was conceived.  She was a farm girl from Iowa and had taken a job in a local truck stop cafe.  She met a guy, a trucker, and ran off with him, got pregnant and returned home to Iowa to have the baby, and then surrendered it to an orphanage.

Bob related his story to me in a matter of fact way, but it was the way people would walk across a layer of eggs, carefully so as not to break anything.   He said he joined the military just to have something solid under his feet, something to belong to.  I later wrote a short story about Bob's maternal search.  I titled it "Reunion", a sorry and sad tale indeed.

I am happy to say that Bob's story ended happily.  He was happily married to a wonderful, loving lady who had given him two children whom he adored....and Bob never missed a mail call.

Should you wish to send a Christmas card, or a hygiene pack, or a pack of treats the deadline is 4 December and they can be dropped off at any Peoria public building, library, or police or fire station. They will be packed and sent out at the Challenger Space Center beginning 4 December so that they can be received in time for Christmas.

Thanks, Jerry. No doubt my next blog will be less congenial. ;)

ah, come on, it is Christmas Season!
a time to be optimistic and happy!

I have some lovely Christmas blogs on tap…but I have to broadcast "all" the weather…sunshine AND the clouds.

Please tell me more and how I can help! It is heavy on my heart lately, the need to specifically support the orphaned military soldiers with no families. I dont know how or where to begin. My email is m r lando wski at g mail dot com