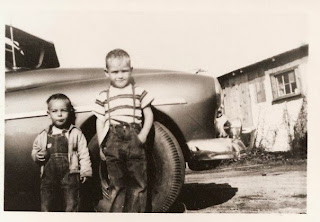 Had Santa Claus not made a wrong turn off of West Main onto Jim Thorpe Boulevard, Prague, Oklahoma, my little brother would have been a Christmas baby.  Even now, old Doc Rollins who recorded his birth just minutes after Christmas night is not one of my brother's favorites.

My brother is a wonderful ethnic "fruit salad"…unlike my older brother and I, who carried the blond gene with ease, my brother was dark skinned, with brown hair, and carries the blood of the Northern Dutch-German and Cherokee Indian in his veins.  For years we combed through our mother's wallet hoping to find the pic of a midget boyfriend, so short was my little bro.  In a family of six footers, my brother hardly reached my belt buckle as he entered high school.  Then, in a his second or third year of high school his hormones went nuclear and he reached that 6 footish range that he had undoubtedly longed for.

Even in "midget mode" his legs were always too long for his body.  He often wore pants in a larger size to accommodate the long legs, the waist bunched up in the rear, cinched with a belt to keep his pants up.  But, my could he run…put him on the track, or on a football field and he ran as swiftly and gracefully as a fawn.  I can remember those little legs, wracked with pain as his restless legs kicked in protest as those long muscles strained to extend to their natural length.  When his body finally settled down for the night he would reach over in his sleep and finger my hair.  He performed that bit of preening me as a mother bird preens her young.  Back then I thought it weird and often moved away from those seeking fingers…but now, years later, I find that to be endearing.

My brother and I are as different as apples and oranges.  I've always had a quick temper and allowed little time to pass before uttering a response to something that riled me.  My brother carries within him a greater sense of calm.  And while my words often flowed easily, sometimes too easily, my brother is more deliberative.  Like my mom, there is that brief moment of thoughtful hesitation before he speaks.  It makes him appear wiser and, frankly, more kindly.

Perhaps it's the blood of a Cherokee "royal", or the Germanic parsimony of speech, but he is less talkative than I.  Oh, I'm not saying that he can't carry on a great conversation, because he can, and expresses himself wonderfully, but his words carry great weight because of the thought given to them before they are uttered.

My brother has lived his life with the highest ethical standards.  He served his country in the Army National Guard, then went on to keep his community safe through some thirty years as a Policeman and Sheriff's Deputy.  He's tangled with the worst of humanity on the mean streets and never became cynical about his fellow man

.  He's had PCP thrown in his face and was saved only through the heroic efforts of another cop who knew what to do.  Still, it took months for him to fully recover from a body that wanted to betray him.  He spent thirty years with death around every corner and chose to celebrate life instead.

If you've read my blog for long, you know how deeply I love my little brother.  He is the last of my family and he keeps me honest on childhood memories and I borrow his face often when I long to see the last vestiges of my mother's smile or the sparkle of her eyes.

My brother may have been born just minutes after the holiest night of the year…but he's always been one of my greatest gifts; a brother to admire, to respect, and to love with all my heart.

Happy Birthday little brother.
Posted by A Modest Scribler at 2:00 AM

Thank you, Jerry. My brother has never been able to figure out how to comment on this blog but he wrote the loveliest thank you note on my Facebook page. I'm very lucky to have a good brother who has such a great soul.

Awe, sounds like someone I know. Good story Dearel.

Excellent story! Sitting here drinking my cup of java & getting caught up on your blog. Traveled for 9 days visiting relatives & sight-seeing. Perfect time to take a vacation.....no lines anywhere!! Stopped in the middle of the road to take a pic of Mt. Rushmore. Ha! Not many times of the year you can do that!!! Hope you had a beautiful Christmas ~

Great to hear you had a good vacation, Carol. I like to travel in September right after all the kids get back in school. The parents are tied up with getting their kids settled in school and the kids are off the roads, all of them having taken their vacations during the summer.

So you're back safe, with some good memories in the vault and that's a good thing, as Martha says. Happy New Year!

Happy New Year to you as well !