The Knock Out Game 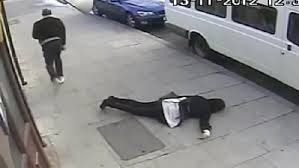 Well, the latest in Black Thuggery, the Knock Out game, seems to be catching fire and spreading across the country.  As most of you know this has been going on for some time.  And, since I've written about the 12 percent of Blacks who commit 50% of all crime in this nation, and since I've written of this Black plague ad nauseum, I'm sure you're probably wondering why I haven't had a thing to say about the latest craze in Black thuggery;  "gang up", come in from behind helpless women and 70 year old ladies, hit them in the head as hard as you can, with the aim being to knock them unconscious with the first hit.

Well, to be honest, I've been packing my brand new Glock 21 and hoping a pack of Black garbage comes after me.  I'm sure, even being a bit rusty, I can take out a good number of them before they lay a hand on me.  Sadly, a guy who fits my profile, has already beat me to it.  We learned in yesterday's news that an elderly white fella in his 60's showed up in Brooklyn yesterday, site of so many of those knockdowns.  So Mr. Vigilante showed up yesterday in Brooklyn, looking for all the world like the next victim.  Soon he attracted the attention of three Black thugs who were angered beyond belief that old Whitey was not huddled in fear at home and leaving them to rule the streets.

So the pack set out to teach old Honky man a lesson.  They began following him and, even when he turned into an alley, they had no qualms about following him in…after all there were three strapping Black bucks against one old white geezer.

Except when white geezer got deep enough into the alley he whirled and began firing.  He shot two of them and viciously pistol whipped the third in the face.  When the three thugs escaped and were admitted into the nearest hospital their tale of woe soon caught the attention of the local Brooklyn police precinct.  And the police were alarmed!

While no police task force had been formed to quash the vicious Knock Out gangs, they now feel compelled to establish a task force to find this old white fellow who has apparently set up his own personal vigilante committee and they just can't have citizens taking the law into their own hands!

Now, I feel sorry for those of you who live in states that severely restrict your right to carry firearms.  Thankfully, here in Arizona, if you want to strap two bands of ammo across your chest, and have two 357 magnums in both left and right holster, while carrying a semi-automatic rifle, and walk into Walmart to pick up a fresh bottle of Wild Turkey, you're perfectly in your rights to do so.  While you may get a few stares from the California transplants no police will stop you.

So, if I want to pack my Glock 21, holstered in fine Corinthian leather, and walk the mean streets of Phoenix it is my right to do so.  And you know what?

We haven't had a single instance of anyone playing the Knockout Game around these parts.  Wonder why?
Posted by A Modest Scribler at 3:14 AM

In kalifornia they allow criminals to carry guns, but me or any other law abiding citizen, unless you are a close personal friend of the local sheriff or police chief.there are a few counties that are exceptions.If the police can have a task force, why not the citizens of Brooklyn start their own task force?I forgot that would be racist(sarcasm).Until then carry an extra clip remember to practice gun control.It promotes better accuracy for shots 2,3,4,5 etc.Lastly I am jealous of your states intelligent gun laws.

Craig, you rational people in California have two choices; vote the libs out of Sacramento or vote with your feet and leave. I chose the latter nine years ago.

Unfortunately, I live in The Peoples Republik of Kalifornistan and can't afford to move out of state, but I am always remembering a quote by Thomas Jefferson that goes, "If a law is unjust, a man is not only right to disobey it, he is obligated to do so." With that in mind, I will carry a pistol if I know I'm going to be someplace that may be questionable. Of course, today that could be anywhere. So I say, disregard the law. After all, "It's better to be tried by twelve, than carried by six."

I went to Payson AZ a few years back and built a few houses while things were slow here in Kali. We had the time of our lives. My buddy and I were members of AA and went to meetings in Payson. He wore Grateful Dead tie die "T" shirts and I drove a 71 El Dorado with the dead head sticker in the back. What a thrill to go to AA meetings with people around the table with pistols in their belts and on the table in front of them. I loved it. One man who spoke was fresh out of prison for murder, said he realized the man he shot was a child of God but he reasoned that God wouldn't mind having him back a bit early. From that moment on the state of Arizona has been my absolute favorite of all fifty. Freedom still lives in that southwest bastion. I love ya AZ!! Don't change and don't let the commies from my state change ya, I'll have nowhere to run.

Why did the two thugs who were shot manage to get to a hospital? Clearly the geezer needs range time or a larger caliber.

Here in good old NJ, defending yourself in your own home is a crime. You can lose everything to that criminal and Chris Christie gets to berate you for trying to protect everything you worked for.

I'm sorry to hear that, Trevor. It were me i would vote with my feet and leave the state. Failing that I'd arm myself anyway and throw myself on the mercy of an appellate court from another state.