Stumbling His Way To Success 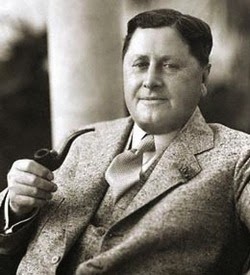 The year is 1891.  A 29 year old fella name William leaves Philadelphia, bound for Chicago where he is determined to be the "king of sales".  He's got $32 dollars in one pocket,  the other pocket stuffed with dreams of riches and success.

He first tries peddling bath soaps and fails.  Not one to give up, he tries a new tack; packaging his soap with a can of baking powder.  That doesn't work either.  Ole Will then drops the soap line and tries selling the baking powder alone.  He ain't selling much baking powder either.  So he decides to offer two free packs of gum along with baking powder.

Soon folks were buying the baking powder just to get the excellent gum!  So Will had finally found a product to sell!  Even as gum sales exploded Will like to hang around with his retail customers, find out what they thought about his marketing techniques, then began putting up signs to advertise his gum in every store in his territory.  The signage encouraged customers to ask for his gum brand so retailers were careful to keep his product fully stocked.   Two years later Will would begin marketing Juicy Fruit and Spearmint gums.   Double Mint would not come along until 1914 but by this time America had become a nation of gum chewers and William Wrigley would become a multi-millionaire and one of the richest men in the nation….all due to a product that Americans, until Wrigley came along, did not care much about.

The William Wrigley Chewing Gum company would march through the entire 20th century with great success.  After dominating the U.S. market for decades they would achieve similar success overseas and become the world leader in gum and candy sales.  And, until 2006 the company would be lead by a Wrigley, the father ceding control to son for a century.  And each of the succeeding sons would put their own unique management techniques to work in the company.  William Jr's son, Phillip, who led the company from 1932 to 1961 was so patriotic that, during WWII, he halted commercial sales of the gum and donated the company's entire production output to American G.I.'s fighting around the world.

In 2006 another famous candy family, the Mars,  bought out Wrigleys, putting two candy and gum giants under one magnificent umbrella.

From soap powders to baking powder to gum, old William Wrigley stumbled his way to a success even he hadn't dreamed of.
Posted by A Modest Scribler at 2:00 AM

Nice story! Who makes Clove and Blackjack? My favorite gums when I was a kid and I found them on Amazon this year and bought them to put in the Christmas Stockings! Nice fun and nostalgia until I discovered they were made in Mexico! and Stanley Thermos is now made in China! For tax reasons that company is headquartered in the Cayman Islands! Traditional American Companies have abandoned us!

Jerry, here, along those same sentiments are what I wrote in an earlier blog called "Corporate Greed and the .99 Cent Egg Slicer"

The other day I was cruising the net, looking for an egg slicer. Nextag provides me a generous selection of these devices, ranging in price from $7.99 to $19.99. I was also looking for a citrus juicer. The price range for that device was also between $8 and $20 bucks, depending on whose brand name was on it.

That same day I walked into a .99 Cent Store to see what they had to offer. I found both devices selling for .99 cents a piece....and they were every bit as good as those offered at up to $20 bucks by the more well known manufacturers.

So, I had a decision to make. Do I buy these two cheap devices made in China, and save $38 dollars, ...or do I buy the famous brand and maybe keep an American employed? Turns out the question was moot. I paid my two bucks for the two items, then stopped by Fry's to pick up some eggs and milk. Just for curiosity's sake I walked over to the kitchenware. Two well known American brands offered the egg slicer and the juice squeezer for $7.99 and both were made in China!

Folks, I'm not one of those OWS protesters but I gotta tell you there is indeed some truth to their claims of corporate greed. While the corporate suits preach the mantra of American jobs they are exporting jobs to China simply to squeeze an extra nickel or two out of an already profitable "bottom line". These two small retail items prove my point. If China can directly export a .99 cent egg slicer, why can't an American company pay an a American a decent wage, maybe help with an employee's health benefits and still sell that same slicer for $4 or $5 bucks!

While these same corporate suits are fighting for obscene profits they are short changing their kids and their neighbors! When they export jobs from an American community they have just put property taxes for schools at risk. They have eliminated jobs in that community and destroyed the tax base of their own city! They just contributed to the federal deficit because they have harmed the government's source of federal tax revenue.

I am a conservative. I believe in free markets. But, far too much corporate greed does exist! This insanity needs to be reevaluated because American unions and American government is not always the villain! There is more than enough blame to go around on both sides but extreme greed is wrong, whether it be from the government, a union or a corporation!

What we need is a good $4 dollar egg slicer, "made in America".

Well told and sad. There are a lot of obstacles ahead for us in this New Year. One at time, bit by bit, I hope we find better direction.

In my experience, most of what gets called corporate greed is in reality survival. First, corporations employ most of us, so their survival equals our livelihood. Second, when we legislate ever more onerous restrictions on manufacturers in the US, we make "Made in the USA" impossible. Third, consumers vote with their dollars, and have voted overwhelmingly for cheaper products, regardless of how poor the quality. This "popular greed" made Walmart and Chinese manufacturing rich at the expense of American manufacturing.