A Santa For 32 Years 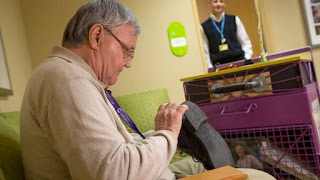 When Albert Lexie was in 8th grade he made himself a shoe shine box in Shop class.  When he finished high school he went out into Monessen, Pennsylvania and shined shoes.  But he kept his Tuesdays and Thursdays open and went out to the Children's Hospital of Pittsburgh and shined shoes out there.  He's followed that routine since 1981.

Now, you may have never heard of Albert Lexie…but the Children's Hospital of Pittsburgh has because Albert Lexie has donated nearly half of his entire life savings to the Children's Hospital, over $200,000 dollars to date.  Albert knows every nook and cranny of that hospital because he has shined shoes there for so long and Albert has become a beloved figure by both patients and the medical staff.

Albert's generosity has become the stuff of legend.  As early as 1998, People Magazine featured a story on Albert's quest to support the care of sick children.   In the summer of 2010 Albert was honored by Major League Baseball as their special guest at the All Star game in Anaheim, California.

A couple of years ago one of the doctors at Children's Hospital decided that Albert's story should be told.  He wrote a book called "Albert's Kids" which told the story whose heart will always be bigger than his pocketbook because Albert gives it all away.  The book, released in 2012 has brought some degree of fame to Albert Lexie.  Though he doesn't own a computer he does have a web site, established for him by one of his old customers who wanted the world to know about the shoe shine man with a heart of gold.

Albert still doesn't own a computer.  Emails sent to him are received on his website and mailed to him via regular mail.   But Albert is well known by those who matter.  In 2006 Albert was inducted into the Hall of Fame For Caring Americans by the Caring Institute.   Albert has even earned his own biography posted on Wikipedia.

So, in the season of giving, for Christmas where Santa takes center stage, Albert Lexie's story is being told and again and again in the media.  This for a man who has never made more than $20,000 a year in his whole life…yet has managed to give away a big chunk of it to save the lives of little children.

Santa would be proud.

Posted by A Modest Scribler at 9:38 AM

That is pretty awesome we need more people like that in the world. God Will Bless him for sure.

Yep…he's quite a guy, cuz…we need lots more just like him.