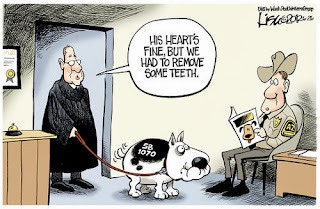 January, 2010...Arizona Governor signs into law SB1070, the law that asked every illegal Mexican "What part of 'illegal' do you not understand?" Prior to the bill's signing La Raza imported 10,000 Mexicans from their Los Angeles Barrio to march in the streets of Phoenix, carrying Mexican flags and demanding the law look the other way from the massive illegal invasion.

Governor Jan Brewer signed the bill anyway and was hung in effigy by angry Mexicans.  The law had not even gone into effect before La Raza won injunctions against it from the liberal 9th Circuit Court of Appeals.  And Barack Obama sent his attack dog, Attorney General Eric Holder to Arizona to file suit against Sheriff Joe and the state of Arizona for threatening to deport tens of millions of future Democratic voters.

Never the less, Sheriff Joe assembled his "posse" and hit the mean streets of Phoenix.  Illegals, stopped in the course of committing traffic violations (not hard to do since illegals have no driver training to go with their phony driver's licenses), asked drivers to produce I.D., registration and insurance, and when the illegals could produce nothing were arrested and deported.

Then Sheriff Joe began busting Phoenix businesses that were hiring illegal Mexicans.  He busted trash haulers, fast food restaurants, construction sites, water parks and car washes.  Soon Joe had to contract buses to haul the hundreds of them to the border.

However, one of the first things we saw during this time was a drastic drop in home invasions, home burglaries, hit and run drivers and auto theft.  We would learn later that Arizona and Sheriff Joe's tough love on illegal aliens resulted in over 300,000 illegal Mexicans fleeing the state, some to New Mexico, but most of them to Mexifornia.

By 2013 the liberal courts and the Obama administration had gutted SB1070 to the point where any phase of the law could be enforced.  And Obama ordered ICE not to accept any illegals caught by Sheriff Joe Arpao.  Later, Emperor Obama issued an edict that any illegals arrested would be set free by ICE.

So Arizona is back to square one.  Crime is again on the rise, Robbery, Rape and Murder are on the upswing as illegals have drifted back to the state.  Hit and Run illegal drivers is back on the rise and, unless Sheriff Joe buses the illegals himself to the border, which he has done on occasion, Arizona is again an illegal playground.

But for those who buy Obama's promise that illegals will not take American jobs, that they will spur the economy and that they are all peace loving, law abiding Mexicans, I beg to differ.

A couple of years ago I did some research on a blog I was writing and used the FBI Uniform Crime Reports.  So this past week I re-visited the FBI's latest crime figures.  I researched eight different Phoenix communities and noted that between 2010, when the illegals fled, and 2012 auto theft dropped  in half.  In the communities with previously heavy illegal residents,  rape, robbery, aggravated assault  and murder rates declined more than 30%.

I guess, when you decide to support or oppose the Democrat's amnesty bill, whether you you want to believe a bunch of pols lusting after 30 million future Democratic voters or whether you believe the cold hard facts about the illegal plague that is destroying us.