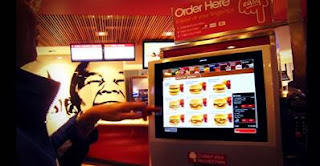 McDonald's Europe has now converted 7,000 of their franchises into "service kiosks".  Like many American youth, European kids have found working at McDonalds beneath them.  Accordingly, McDonalds has cut their franchise work force in half simply by employing "dumb terminals" in place of "dumb juveniles".  Customers no longer have to wait for a teen counter worker to cease picking his nose or one involved in a fit of giggles with a fellow teen.  They simply walk up to the order terminal, push the same buttons found on the McDonalds register and send their order to the kitchen.

The kitchen help does their usual routine of microwaving a previously cooked burger, scoops up the fries and shuffles the bag either to the counter or to the drive-thru window.

So, as our own crop of spoiled nearly illiterate millennials demand $15 dollars an hour to man a fast food counter, McDonalds needs only to gear up a billion dollar capital tax credit and install those electronic kiosks in their American restaurants and send the miscreants back home to mom and dad…so they can ask to have their weekly allowance geared back up.

Pardon me for laying the "old fogie" lines on you, but when I was a kid, we would have killed for a fast food counter position!  Our only employment opportunities back then were working in the farm fields, mowing lawns, or sweeping popcorn out of the theater for fifty cents an hour and a free movie ticket.

Now, I'm not denying that McDonalds is a great big old capital enterprise, with an eye toward the bottom line….but I also know that the company, having suckered them into their restaurants since they were pre-schoolers, really do want to lend a "hand-up" to teens.  It's an effort to instill the McDonald's culture in them for life.  Alas, fast food franchises were never meant to be permanent careers; they were to be entry level jobs that taught teens how to show up for work, take a measure of instruction from an adult, make a little date money while attending high school or college, then move on to real careers!  I once read that one in five teens in prior generations had, at one time or another, worked for McDonalds, and that three in ten teens had worked for some other fast food franchise.

Alas, spoon fed by the liberal ilk, who begin the indoctrination in grade school, kids today have developed that same sad "victim" mentality that three generations of Blacks enjoy; Capitalist pigs "owe" them a hand out simply because they have the money to do so.

So, the Occupy crowd, and the Obamanites of recent years, now march in the streets and demand $15 dollars an hour to flip a burger and put a pickle on it.  And our Socialist President speaks for them and against the capitalism that brought us prosperity for a couple of centuries.

So, Mickey D, deploy your "dumb terminals"…it's my guess those electronic kiosks have about a 20 point IQ advantage over the current crop of millennials.

I worked at a Winchells Donuts, a gravy job compared to picking prunes and walnuts. Though I was never robbed and pistol whipped doing farm labor. It is time to automate out the whiners.

Wow, Craig…I might have worked for free at Winchells! They always made the best donuts. Gonna have to see if they are still in business because I never see them anymore.

I delivered 375 papers with my older brother every Tuesday and Thursday morning from the first grade to the fifth grade. Our dad bought us a new Toro lawnmower that we put to use all over our neighborhood mowing lawns and hillsides of weeds. Our local congressman even had us tote that thing up a 400 foot mountain side to mow his name into the weeds at campaign time and put down the white chaulk so it could be seen for miles down the freeway. I took to keeping up that lawnmower myself and enjoying that kind of work. I asked my father if I could help him fix his power tools he used in his construction business. By the time I was in the seventh grade I had my first full time business with my own tax id number and wholesaler certs with several companies. Believe it or not I was proud of that tax id number! I ran that business fixing my father's equipment and several other power tools from people about town. At sixteen I was doing this in the afternoon and evenings and working for my father building houses on the weekends, holidays and summertime. My grades were usually average or maybe on occasion slightly higher. I had, compared to many friends, a lot of money, but what I had the most of was pride. Proud of my accomplishments, proud of the fact that I had the respect of my Father and men two to three times my age. Most kids my age worked and we thought nothing of it. It's what you did if you wanted a car, motorcycle or money to take a girl out.

I don't know where this new lackadaisical attitude toward work and building a work ethic came from. I know it came from my generation, but after that I just don't know. Me, the schools, mtv, what? When I relate my experiences I am asked, "with all that work were you happy? Did you have any fun?" I thought I did, but we didn't focus all our energy on just having fun, we wanted something. I know if it stays like this the illegals will be very successful here and American kids will be living in the streets. Maybe that's one of the reasons so many are moving back home. Too much trouble having to take a second job to make ends meet, so let's make someone else responsible for my upkeep. I'm told I'm old school and that it's wrong for kid's to work when they have so much studying to do. I think it's part of growing up. So sad.

Ken, first of all, that 375 paper paper route was huge! I think the normal route around my small town was 60 a day. i learned more about you in this post than in the many you have posted previously. Congrats on work well done and an enterprising spirit.

i don't know how youth laziness came about but it certainly didn't come from my family. Everyone of my kids worked from the time they were about ten years old…and that includes doing their home chores as well. And every one of them today remain hard workers who take responsibility for their own success. As to the myth that work takes away from the school work, I'm not buying that…I see hours and hours dedicated to social media and probably as much with their video games.

By the way, I have a tax ID for this blog…and both my ad sources, and the IRS just laugh like hell every April 15th…It doesn't pay for my coffee. ;)