Letter From A Birmingham Jail 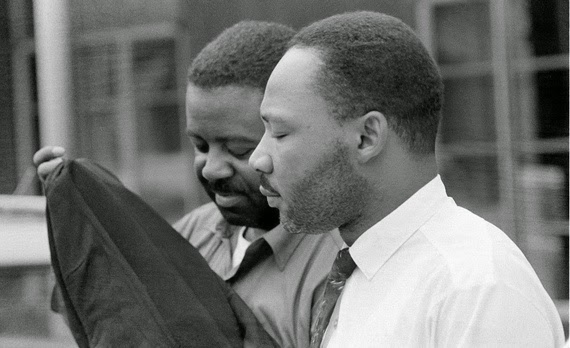 On April 12th, 1963 Dr. Martin Luther King was arrested in Birmingham, Alabama for leading a peaceful protest of businesses barring Blacks, for the right to walk into a polling place and cast a vote...for the right not to be called "nigger" because of the color of your skin.

As peaceful protestors marched down the streets of Birmingham, law enforcement officers deployed electric cattle prods to bring them to their knees, then they violently arrested Dr. King and threw him into a Birmingham jail.

When Dr. King asked for some writing paper his jail keepers refused him; thoughts and ideas are dangerous things and they were having none of it.  So one of King's supporters snuck a newspaper into the jail.  Having nothing else to write on, King penned his now famous "Letter From A Birmingham Jail" in the margins of that newspaper.

In his letter King responded to his critics who demanded to know why King and his followers weren't patient enough to wait for the courts to grant Black equality.  In his heartfelt letter King argued that justice is not always promised by the courts...that Blacks had been waiting for a hundred years for the courts to mandate equality.

In perhaps the most touching parts of his letter King describes what it is like to be barred from a lunch counter, or a hotel room when you're weary, or the demeaning of the Black soul when called "nigger" or when Whites feel it is perfectly alright to assume your first name is "Boy."

Throughout Martin Luther King's "Letter From A Birmingham Jail" King insists that his marches and protests must always be non-violent....that hate and bitterness shall never win the day...that only love can heal our differences.

When King has finished his letter a friend sneaked the jig-saw writings from that old newspaper and offered it up for publication.  The New York Times and The Washington Post and every newspaper in the country refused to publish it.  But the letter began to circulate and gathers a following for the heart felt thoughts of a man who asks that Blacks be treated as kindly as anyone else.

Finally, The Atlantic Magazine printed the letter that summer, under the title "The Black Man Is Your Brother".  People of fairness were touched by King's sincerity and for his insistence that racial equality be achieved only through peace and love.  King, in this one simple heartfelt essay has convinced America that something is very wrong about prejudice.  Soon NBC's John Chancellor is traveling with the Christian Leadership Conference and reporting on the ugliness of those who demand Blacks be put in their place.

Soon after that the court of public opinion began to trump judicial court ponderings and Americans are finally awakened to the practice of racial injustice.

Sadly, nearly five years to the day that the Letter From A Birmingham Jail was published, Dr. King was assassinated on a hotel balcony in Memphis by a white man who just couldn't relinquish the privilege of calling a grown man "Boy", or denying him a place to eat, or drink, or a place to lay his weary head down at night.

In one passage King expresses what was at the heart of their protests:

"I wish you had commended the Negro sit-inners and demonstrators of Birmingham for their sublime courage, their willingness to suffer and their amazing discipline in the midst of great provocation. One day the South will recognize its real heroes. There will be the James Merediths, with the noble sense of purpose that enables them to face jeering and hostile mobs, and with the agonizing loneliness that characterizes the life of the pioneer. There will be the old, oppressed, battered Negro women, symbolized in a seventy-two-year-old woman in Montgomery, Alabama, who rose up with a sense of dignity and with her people decided not to ride segregated buses, and who responded with ungrammatical profundity to one who inquired about her weariness: "My feets is tired, but my soul is at rest." There will be the young high school and college students, the young ministers of the gospel and a host of their elders, courageously and nonviolently sitting in at lunch counters and willingly going to jail for conscience' sake. One day the South will know that when these disinherited children of God sat down at lunch counters, they were in reality standing up for what is best in the American dream and for the most sacred values in our Judaeo-Christian heritage, thereby bringing our nation back to those great wells of democracy which were dug deep by the founding fathers in their formulation of the Constitution and the Declaration of Independence."

It really is amazing how far we've come since Dr King was alive.Are we perfect? Hell, no! There's still Racial prejudice bigtime in the South. Not sure that will ever go away because children are taught prejudice from an early age there. Illegals have "stolen" a lot of the thunder, as the new group to hate. Can't change human nature. As much as we try, it's hard to accept differences in culture. Somehow, we really do need to find a way to "just get along"...