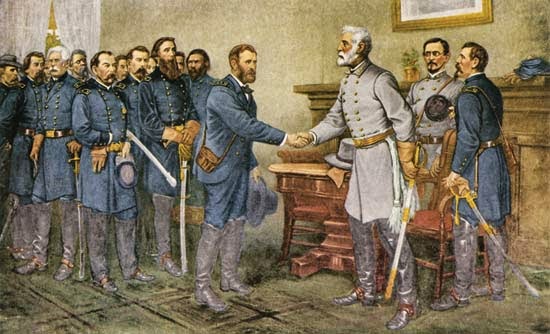 This coming week marks the 150th anniversary of Lee's surrender to Grant at Appomattox Courthouse.  Folks who study Civil War history marvel at some of the remarkable things that occurred on that day, April 9th, 1865.

Lee was down to 20,000 starving, bone tired troops.  Most people don't know that Lee negotiated the surrender without consultation with Confederate President Jefferson Davis.  Or that the surrender ironically took place at the same house where the first battle of the Civil War began.

When Lee prepared to meet with Grant he donned his finest dress uniform while Grant showed up with muddy boots and dirty battle uniform.

Both men displayed great professional honor in their meeting.  After the peace signing Grant asked Lee if there was anything he could do for him.  Lee stated that his men were starving.  Grant then issued an order to break out rations to feed the conquered army.  Grant graciously allowed the Confederates to keep their personal side arms and their horses to help them get back home.

When the two great generals emerged from the house the Union troops began to cheer their victory.  Grant put an immediate stop to it, determined to allow these brave Confederate troops to leave with dignity, even in defeat.

The peace signing occurred on Palm Sunday, signaling an end to a war that had taken the lives of 600,000 Americans, the day itself cause for reflection, with an appreciation that the long bloody war was over.

Two great generals, each unique in their own way, displaying grace and dignity on a day when one would admit defeat and the other would quietly celebrate victory.

Quite a remarkable story.

As usual I learn something new an interesting reading your scribblings.

And that makes it all worth it, Craig. Thanks much.

These are, without doubt, my favorite columns of yours. Your knowledge of our nations history and your ability to tell it is truly a gift. Should you ever choose to take a job at a college teaching the subject let me know, I'll definitely make the effort to sign up.

By the way, a most sincere congratulations on your "Million Page Hits"!! Clear indication of your talent. I know I have enjoyed coming here and to your other pages, for what now clocks in the years. Your writing is always a pleasure. Thanks, hope your future is long here!!

Thanks, Ken....and thanks for being in on my long blog ride!

Your welcome of course but truly it has been my pleasure! Keep 'em comin, ten million will be a piece of cake now!

Ten million? I should live so long!