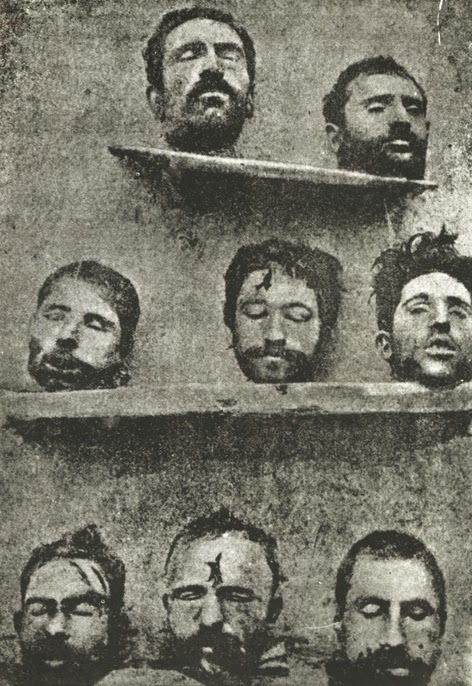 These past eight days we've had the sad duty to commemorate two of the past century's fits of human genocide.  On April 16th we were asked to remember the Jewish holocaust.  And so tragically less known was the Armenian massacre that marks the hundredth anniversary of man's savagery to man.  April 24th, 2015...commemorating a day when one of the world's great cultures was nearly wiped from the face of the earth.

Two million Armenians...killed over an innocuous little suffix; "ism".  An "ism"...totally harmless..until a hateful man, and a hateful philosophy stands in front of it and makes it an ugly thing indeed.  The Armenians who survived have been offered all manner of explanations as to why their fathers and mothers, sisters and brothers, uncles and aunts and grandparents and great grandparents were raped, tortured, murdered.  But when you add up all the excuses, and boil them down, the slaughter was born from two father's ; hate and greed.

The Ottoman Turks, when asked to account for the slaughter, denied it even happened.  Those belligerent enough to admit it offered this:  "It is totally unrealistic to believe that a society can exist where Islam and Christianity must dwell together in peace."  That line was issued by one of the Ottoman Turk's grand "pooh bahs".  And, sadly, he speaks a truth!  Whether in India, or Indonesia, or Syria, or Iraq, or Afghanistan, or Iran, or the Gaza Strip or Egypt,  the Islamist must war against the infidels lest the walls come tumbling down on a religion fraught with so much paranoia and so much need for hate to feed their god.  It has been true since The Crusades and it is still true today.  Its cancerous hate now sickens southern Thailand, and the Philippines, and Africa...and it is an ugly, growing thing now blossoming in London, and Paris and Scandinavia and pockets of America.  And when they can't fight with infidels they will fight each other; Shia against Sunni....even mouth the credo "the enemy of my enemy is my friend."

But let us not forget the fathers of the Armenian massacre.  Hate sprang forth to commit mass genocide against 2 million Armenians and Greed came along to confiscate their property...and worse, robbing them of their homeland, of their identity, of their pride.... for a two thousand year old culture that embraced Christianity, that wrote books and music that made the angels sing, who valued family like few societies ever have.

As with all "ism"s, the priests and the artists and the intellectuals were the first to be persecuted; they held the greatest weapons in defense of extremism...ideas.  So they were beheaded,  their heads set on shelves or atop a post so that, somehow, the haters could squeeze out the last drop of hate, before going home and replenishing their poisoned hearts for the next day's slaughter.  And, not possessing the Nazi technology of acid and ovens, those they could not kill fast enough were force marched out to the Syrian desert ...to die of thirst and starvation and disease.

From:  Hagop Martin Deranian
Varter was born in 1885 in the lively village of Hussenig which, with its population of five thousand, was located in a valley a few miles below the flourishing and more urban city of Kharpert. It began with the ominous knock on the door in the middle of the night. The Turkish gendarmes said that they wished to make some immediate purchases in the Nazarian store. Mugrditch was not given time to dress but left his tranquil home dressed only in pajamas. Varter never saw her husband again. No one agreed on the precise fate of Mugrditch Nazarian. Some say he was taken out of town a few miles and shot. Others relate that he was among those who were imprisoned in Mezireh and exposed to inhuman tortures so unbearable that he and the other prisoners poured the kerosene from the jail lamps onto themselves and ended their lives as human pyres. A few days later, on June 11, the horror began for Varter, all the more frightening since she was nearly full term with another child. Ordered to prepare for “deportation”, she gathered her infirm in-laws, her maid Tamam, and her children, Eghisapet, Takouhi, Nazareth, Yeghsa, Arakel and Avedis. She obtained a donkey with a saddle bag with two pockets. In each pocket she placed one of her smallest children. The next day, the gendarmes pushed the donkey with its two children down a mountainside and to their deaths. “I saw Varter at noon”, a fellow companion tearfully recalled of that day, “and when I saw her again in the evening, I could not recognize her, She was almost naked”. “Elmas”, Varter said to her friend in utter anguish and pain, “let us find a well and throw ourselves into it”. At that moment of despair, some Arab woman took pity on her and drew some water from the well and quickly gave it to her before the gendarmes saw. They had been traveling in these terrible conditions for a month and a half since leaving Mezireh. One morning soon thereafter, Varter awoke with her children and saw that the caravan had moved on. Seizing the opportunity to hide, she descended into a dry well with her children. There she remained safely for two days without food. A passing Arab, some say a Pasha, came to the well and shouted into it, “If there is anyone down there, let him speak, as I am about to throw stones in the well”. “No, don't throw any stones”, Varter shouted, “I am here with my children”. “Very well” the Arab replied, “I will help you out”. Varter was relieved. “Help my children out one at a time”, she pleaded. “Then I will come”. “No!” the Arab emphatically responded. “You come first so that we may pull the children out together”. Hesitatingly and very slowly, Varter lifted herself out. Seeing her comeliness, the Arab seized her and forcibly adducted her. He was totally deaf to her appeals for her children left in the well. Their echoing voices cried after her, “Mother, Mother!” Those infant cries haunted and tormented her the remaining days and dark nights of her life. The dry hole became Varter’s wailing well. M.Teranyan, Husseinik. Memories and Emotions about Native Hearth and People, Boston, 1981, pp.180-189 (arm) - See more at: http://www.genocide-museum.am/eng/personal_histories.php#sthash.0xP9a6iW.dpuf

STORY OF SEROPE ASDADURIAN "Our family consisted of fifteen members, of whom four are now living, the others having died by the hands of the Kurds and Turks.  "Before the year 1893 the brother of the celebrated robber chief, Mousa Bey, had abducted the daughter of the head man of our village. After a while the girl was rescued from his hands and married to a young man of Vartenis. In the spring of 1893 she visited her father's house, after which her father wished to send her, under safe escort, to her husband at Vartenis. He besought my father to carry her, and he accepted the charae. On the way fifteen Kurds attacked the party and attempted to carry off the woman, but eny father and his companions resisted, and delivered the woman safely to her husband, two of the Kurds being killed in the affray. My father fled to Russia, but soon returned, and for a month or so remained so concealed that no one saw him. After a while, however, it became known that he had returned, and suddenly one day the Mudir (Turkish petty governor) of the neighboring village surrounded our house with a band of zabtiehs (gendarmes) to seize my father. He knew that to be taken was probably to be killed with tortures, and determined to sell his life as dearly as possible. So when the zabtiehs burst open the door and cacne in my father killed one of them and rushed out with his rifle. But in his haste he struck his head violently against the frame of the door and fell, nearly dead. One of the zabiehs fired and killed him. They then killed my mother, my two sisters, my uncle and four cousins. They carried away our cattle and sheep, robbed the house and burned it." So the crimson storm of carnage rolled on, until not less than thirty villages had been laid waste, so completely destroyed that even the names had been erased from the official records. As to the number of killed it is almost impossible to give accurate estimate. It must have been not less than five or six thousand, many put it much higher. Some soldiers said that a hundred fell to each one of them to dispose of, while others wept because the Kurds did more execution than they. Some, however, claimed to have been unwilling actors in the scene and suffered great mental torments. The wife of one noticed that he failed te pray, as had been his invariable custom. She spoke of it to him and he answered, "God will not hear me. If there is a God he will take vengeance for these awful deeds. Is there any use to pray? "It is also told of other soldiers that on reaching their homes they inquired of Armenian acquaintances, "Who is this Jesus of Nazareth? The Sassun women were constantly calling out to Him." At last the carnage stopped. The commander-in-chief of the fourth army corps at Erzingan reached the field in time to save a few prisoners alive and to prevent the extermination of four more villages that were on the list to be distroyed. He then sent a telegram to Constantinople that reballion had been overcome and that order had been restored in the province. For this he received a medal and the thanks of the Sultan. Bliss, Rev. Edwin Munsell. Turkey and the Armenian Atrocities. Edgewood Publishing Company, 1896. Reprinted by Meshag Publishing (Fresno, CA)in 1982 - See more at: http://www.genocide-museum.am/eng/personal_histories.php#sthash.0xP9a6iW.dpuf

These are only two stories. There are two million of them, but sadly, most aren't around to tell them. Decades ago the world was shocked by the Armenian Genocide. The World Courts and the United Nations once held the Turks accountable. In recent years the United Nations is trying hard to forget. When Pope Francis recently referred to the Armenian tragedy as "genocide" the United Nations responded with a more benign term "human atrocity"....perhaps making that old Ottoman Turkish poison easier to swallow.

Well, if the United Nations is right...if we can cloak mass murder in somewhat gentler terms, and if we can forget that 1915 ever happened, perhaps the poison is indeed easier swallowed. But, be warned: we are already seeing the same level of barbarism arising in the Middle East today. Forget those two million Armenians at your own peril...for you and your family and your community, and your nation may be next!

Finally, for those who deny, and for those who choose to forget the Armenian Massacre ever happened, you might want to recall Adolph Hitler's words when convincing his Nazi councils that the West would do nothing about the Jewish Holocaust:

"Who, after all, speaks today of the annihilation of the Armenians?".....(and 7 million Jews did not live to heed that warning.)

How can they call Muslim the Religion of Peace when history is fraught with death and destruction at their hands? It sounds like there will only be peace in the world when the last Muslim is laid in the ground. Are we really going to have to kill them off for the world to live in harmony?

That's kinda scary, Frank. Too much like the thinking of the Nazis and Turks. There has to be a better way.