An Easter Gift For My Brother 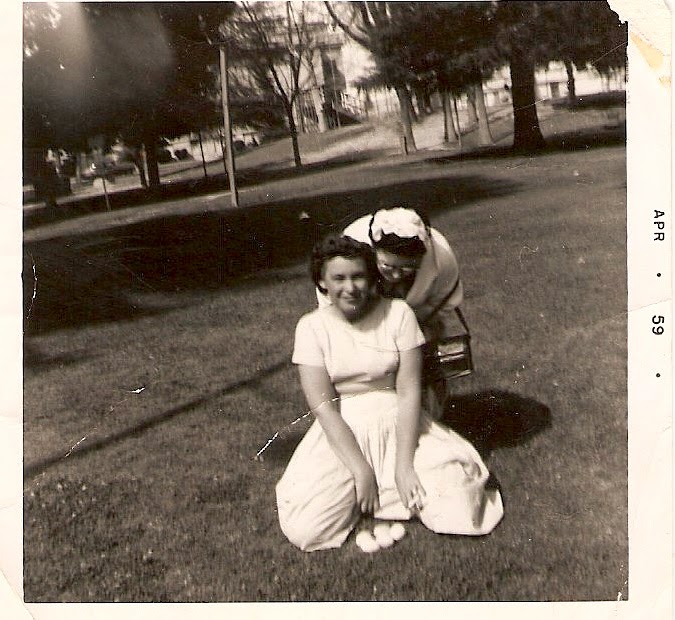 Happy Easter, brother.  My gift to you this morning is a ride in my time machine.  So, hop in!  Let's set the dial to 1959.  The top TV shows back then were Gunsmoke, Maverick, The Jack Benny Show, Dragnet, Name That Tune, I've Got A Secret.....and a good two dozen westerns that held our interest. "At The Hop" by Danny and the Juniors was popular on the juke box.

The Middle East was in its usual perpetual turmoil as King Faisal II, in Iraq had been killed in an army coup and the western powers dispatched 6,000 troops to Lebanon to quell the ruckus there.

In Sports that year the Yankees would defeat Milwaukee and win the World Series, the Baltimore Colts would defeat the New York Giants for the football championship and a young Wilt Chamberlain would sign with the Harlem Globetrotters.

As we awakened on Easter morning Mom would already have a couple of dozen of those .86 cent eggs, boiled, dyed and cooled the night before, our family's contribution to the big family Easter potluck on the holiday.  Aunt Francis would be boiling a pot of beans with a big ham hock in the pot, and making macaroni salad, Aunt Polly would be making one of her jello delicacies, Aunt Mae would thrill us all with a German Chocolate cake and someone else would kick in a ham and the mash potatoes.

I don't know why Easter was such a big thing with the Friend-Payne clan but it was.  Back then the only big church goers were Granny and Aunt Icie's family.  Perhaps it was their "fire and brimstone" Baptist youth that spurred our large clan to celebrate Easter with such enthusiasm.

I personally didn't think Easter even came close to Thanksgiving, Christmas, or the 4th of July, but then I was just a youthful heathen back then.  Heathens that we were though, we were always dispatched to Sunday school, without fail.  And we'd all attend sporting new Easter dresses for the girls and new shirts for the boys.

After church we would all gather for the big potluck dinner, either in a park or at one or another's home.  We got to sample the cooking talents of all the varied matriarchs, critically judging whether the macaroni or potato salad had too much mayonnaise and why the hell were the beans under salted, or over salted, and who the hell likes Vienna Sausage in a bowl of lime jello?

I always seemed to be too old to get much out of the Easter egg hunt, but it was fun to watch the little ones so excited to find a colorful egg in the bushes around the front porch, or hidden in the bough of a tree.

Once we had sated ourselves on good old home made Okie food, and after the men folks had chewed on, and solved all the world's problems, we'd all begin filtering back to our own homes.  Around 4PM  one or another of the three main TV networks would air the annual and only showing of The Wizard of Oz.  What a treat that was, even on a Black and White 17 inch TV screen!

Hey brother!  It's getting late!  Better hop back in my time machine and boogie on back to Easter, 2015.  I hope your day is a good one, brother.  Hide those eggs well for the grandkids, don't eat too much ham and scalloped potatoes...and be grateful that there's no more Vienna Sausage lime jello mold!

Posted by A Modest Scribler at 4:36 AM

Happy Easter, Scribe. Below is a 4 minute video on the "Best of Times". Think you'll enjoy it.

Happy Easter to you, Jilly.

Happy Easter, Frank. And thanks for the visit back to yesteryears.