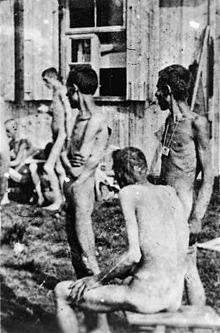 On April 11, 1945, at 3:15PM, the U.S. 9th Armored Infantry Division arrived at a place called Buchenwald. It would be the first Nazi concentration camp discovered...and the smallest.
As Captain Fred Keffer describes the scene, "we came upon this large concentration camp and, above the entrance was a German sign that read 'you get what you deserve'. What we found there scared us more than a hail of machine gun bullets...thousands of human skeletons walking around...we had never seen such horror...not even the horror of war could surpass it."
The Jewish prisoners, despite their skeletal bodies, were so overwhelmed with joy that they made frantic attempts to lift their liberators into the air, shouting with joy at their survival. 56,000 did not survive; they were used as human "lab rats" to test typhus injections, enduring white phosphorus poured over their bodies, then timed to see how quickly they died. Some of the dead were skinned, their skin to make lampshades for the Nazi elite. Over 1100 were shot in the back of the head, a thousand Jewish women were peeled off and sent to the camp whorehouse. The vast majority just died from overwork in Nazi factories.
As the Americans moved through the camp they found one building, meant to house 12 horses, occupied by over 1200 prisoners, mostly those so starved or sick they could not rise from their wooden slat beds. At first the Americans were horrified, even scared to look on these remnants of human beings. Then they became quite angry. Captain Keffer ordered the Mayor of a nearby town to free up all the food stored in store rooms, and all the food in local markets and bring that food to the starving prisoners. The emaciated prisoners ate like wolves, then, unused to such generous meals, threw it all up, wiped their mouths, and began eating again. Many were too sick to eat; American G.I.'s would spoon feed broth to these wretched folks...until they could once again tolerate solid food.
Despite the horror of Buchenwald, even greater horrors would be revealed as the Americans began liberating all of the Jewish concentration camps. Tragically, for nearly 7 million Jews that liberation would come too late.
As we watch events unfolding in the Middle East, and here in our own country, as we see rising anti-semitism and hostility to Christians from our liberal elite, we should never forget the capacity to destroy by those who believe "their beliefs" are the only beliefs and everyone else can go to hell.

I'm always so amazed at the extent of the evil humans are capable of and the horrors they perpetrate on one another.

Another thing that just amazes me is the idiots who will argue to no end that this holocaust never took place. It was a complete fabrication. I feel such a sadness whenever I see or read on this subject and a shame that it could have been prevented. I am just completely baffled as to why it happened. I have read so much on the subject of the Jew and cannot still find anything justifying all the hate aimed their way. Do you have any ideas on the subject?? Now we have a president who seems hell bent to facilitate still another holocaust against Israel, a loyal ally! Truly it just amazes me.

Ken, I guess some folks deny The Holocaust for political reasons...others deny it because they just can't imagine that there's capacity in the human heart for such cruelty.

this happen my daddy was in world war 2 and told me so.