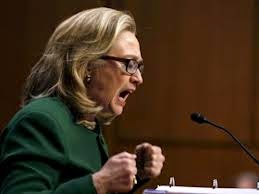 Last week Hillary Clinton kicked off the first week of her 20 month campaign to win the White House.  She first aired a two minute, eighteen second commercial.  For two minutes and six seconds the commercial featured apple cheeked, clean cut, hard working Americans as they went about their day.  The last 12 seconds was Hillary saying she wanted to be America's "champion".  The commercial was quite clever; 2:06 of every day Americans and then, "oh god, it's Hillary".

Then she jumped into her specially equipped mini-van she dubbed "Scooby", an innocuous and heartwarming little nomenclature that just screams "I'm just an every day Jane..and one of you..then headed off to Iowa.  Somewhere in Nebraska Hillary got hungry and donned big dark glasses and walked into the first fast food joint she's seen since she and Bill were shilling folks in Little Rock.  She ordered a green salad and a Chipotle Chicken bowl and left.  (Hillary didn't know the security camera picked up her appearance and the franchise owner sharply noted that she left nothing in the tip jar for those struggling fast food workers.)

After finally arriving in Iowa she showed up at a machine shop (and never once said the fellow that owns it didn't build that business), then sat down at a table with three former Obama campaign workers to discuss the woes of the working man and woman.  In that brief 20 minute talk Hillary was able to chirp in that she was the "people's champion" and would make things better...without ever saying how.

As the average Jane and Joe onlookers stood behind a fence, Hillary emerged from the back of the machine factory and jumped into a limo led by an additional limo in front and one in back.  We could not see through the darkly tinted windows whether Hillary waved at the masses...or not.

There was something ghostly about Hillary here in her first week.  There seemed to be no solidity to her.  Even under scripted conditions, in meeting with scripted actors playing the role of "citizen" Hillary just did not seem real.  She always seemed too ready to insert into the conversation that she was the "people's champion"...even when they were talking about the weather!

When Hillary returned to New York, to brow beat a few more rich guys to donate to her campaign, there was something "chameleon" about Hillary.  Gone was her 2008 position against same sex marriage, gone was her stance against granting citizenship to illegal Mexicans....she even took the time to love up Elizabeth Warren a little in an effort to court the far left liberal contingent in the party.

And, not once during the whole week did Hillary answer questions about Benghazi.  Nor would she respond to queries about she and Bill's foundation that has raked in hundreds of millions of dollars from foreign dictators (and, in return shifted positions she previously opposed as Secretary of State).  She did resign last week from the foundation (Chelsea and Bill will have to pimp for dollars alone for 20 months)  but she didn't explain how she could rightly complain about Wall Street rich guys when she and Bill are filthy rich themselves...all from making half hour speeches paid for by our tax dollars at public universities.

And by completely overhauling her positions from 2008, Hillary is showing "the real Hillary", that she will say and do anything to acquire the ultimate seat of power, the one in the Oval Office.

And, God help us all, their are more than enough Blacks, liberals and women who'll vote their vagina to win her what she seeks.  Cue up "Hail To The Chief" for Hillary...the coronation for the greatest ghostly chameleon in history has begun.
Posted by A Modest Scribler at 2:00 AM

I'll have to assume its simply the company I keep but I know of no one who's interested in her as president.

You must be in good company, Brian. But I would be willing to bet you that, though they might not say it, there are women in your circle of friends that will walk into that voting booth and vote for "the first woman President". Against all that I wish for, I believe Killary will win the vast majority of the vagina vote.

Having watched as my died of cancer hilary is the only person that I can honestly say deserves to get a rapidly progressive form and die.

That would be blatant hypocrisy for those who claim desire for equality. You're probably right though.

Craig, I'm ashamed to say I've wished that for Obama, far more dangerous than Hillary will ever be.

Brian, the women's equally issue is the biggest fraud of the last couple of decades. But, hey, if it works for the Dems they'll just keep using it.

There is hope. She might die of old age before we get to the elections, although that might not be good enough. The Dems will keep her propped up in a chair, hook up gadgets to her mouth and arms, and play old Hillery speeches to try and fool the public. Unfortunately, it will work. She'll still get 47% of the vote. Sigh.

You got it right, Frank. Let the coronation begin.

The Irish bookies have her as a 91% probable.