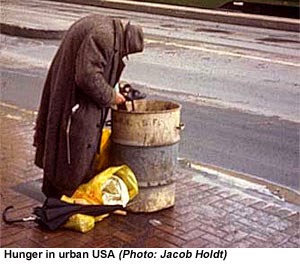 If Jesus was alive today, and if he wanted to feed those multitudes with barley bread and fishes, he'd have to pay the city of Sacramento $1,250 dollars for a permit to do so.  I've just been reading a report on the hungry and homeless from the National Coalition For The Homeless and I was surprised to learn how difficult states and municipalities are making it for anyone who wishes to feed the hungry.

So far 21 states have implemented legislation that makes it illegal to feed the homeless, or make the permit costs so prohibitive that a charity organization can't afford the permit.  Hundreds of American municipalities completely outlaw any type of organizational feeding unless a charity actually owns a building for the purpose.  Cities have begun to post signs in public places and public parks citing the legal code and impressive fines for daring to feed homeless people in those places.  One city converted a "Don't Feed The Pigeons" sign, crossed out "Pigeons" and substituted "homeless" to alert people of the new laws.

I'm a bit torn by this issue.  While I acknowledge that there are plenty of "gamers" within the homeless community, and while I'm aware that large concentrations of homeless folks I also know there are many folks truly in need and truly hungry.  It seems to me that the two sides ought to be able to find some common ground on this.  There are more than enough open spaces in every city where food charities could do their thing.

It seems to me that, every time government gets involved in "helping people" they always screw it up.  Makes me almost suspect that our government masters don't like private charities getting involved with the most vulnerable of our society lest they rob government of their iron control over the masses...and the subsequent lust to "vote buy" those who need help.

You might be surprised to know that Socialist California has ten major cities that have implemented tough new laws against feeding the homeless.  And you might be further surprised to learn the most stingiest laws have been implemented right there in liberal Silicon Valley who, through their political donations, control the Democrats running the show in the state capitol.  They want liberal laws passed, and working citizens to pay for them....just not in their back yard.  In fact you might find it shocking that California leads the nation in statutes against feeding the homeless; more than three hundred percent bigger than any other state.  How, after all, can you control the masses if you don't have total control over their food and shelter!

Perhaps most bizarre has been the ACLU's role in making it more difficult to feed the homeless.  In a dozen cities across the nation the ACLU has brought suit against supermarkets, restaurants and wholesale food distribution companies for providing free food, some of which they found to be beyond the "sell by" date.  As a result of these suits dozens of businesses have opted to stop providing these food giveaways.

Understandably, the current war on feeding the homeless has put a great strain on community food banks.  Folks were stripping the shelves as they came in daily to get groceries.  This problem was compounded in California by illegals, claiming no income and working for cash, and living off the good will of folks donating to the food banks.

A couple of years ago, here in Phoenix, a church intended to set up a daily soup kitchen for the poor.  The church was located in a district where the demographics were made up of heavily Democratic voters.  The same Democrats who are all too willing to vote your tax money for any number of social welfare programs adamantly refused to allow the church in their neighborhood to feed the poor....they didn't mind voting your taxes to feed the poor but they'd be damned if they wanted those poor wandering around THEIR neighborhood.

Hi Modest; I believe there is an under handed plot, (Paranoid, no) just looking at the facts, for the homeless, the old and infirmed to just die as they are not able to work or pay taxes; they are a burden to the government coffers, they are no longer a productive contributing member of society. BUT if the person is of working age and can pay taxes, no matter if they are foreign, legal or not, they may be awarded amnesty, then they are helped with medical care, food stamps, and apartments. I am not saying that we should not aide these people, but lets help our own helpless; at one time they were contributing members, they paid their dues..They are owed something...

Vivian, you certainly won't get an argument from me on what you say. When Barack Obama stripped $500 billion from the paid up Medicare fund and re-alloated it to Obamacare I was pretty suspicious that maybe he was doing just what you suspect...."let's kill off the old folks first."

Liberalism is a mental disorder.

Craig, it's just that their brains aren't wired right...something missing up there.

Not all of California has been waylayed by the Liberals. Many of the outlying Counties(Lake, Mendocino,Humbolt etc) are still Red, and continue to feed the Poor, Homeless and Elderly. You'll find the Liberals live mostly in the greater Bay and Los Angeles Areas. Unfortunately, most of the Homeless are moving to those outer areas(where we haven't lost our compassion and common sense) and overburdening the system without the help of the State. Just makes no sense to me...

Good to hear there are still pockets of sanity in the Golden State, Frank.