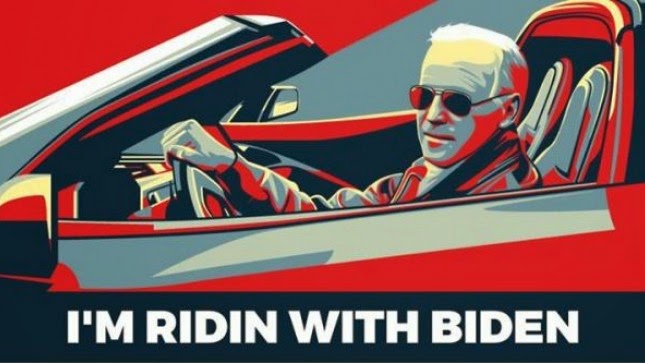 Note to readers; if you look over on the right side you'll see that I just passed a million page views last night.  Thanks to all of you who made that possible.

Okay, all you Hillary haters; you can relax now.  Crazy Joe Biden has just rode in in his iconic Corvette, shades in place, and ready to take on Hillary for the top job.

The Hill just reported on Thursday that a political Super Pac has been formed to promote Joe Biden's ascendancy to the American throne.  They're calling their theme "Ridin' With Biden" and they're ready to spend big bucks to get Joe ensconced in the Oval Office.

And what might we expect from a Biden campaign?  Will he be feeling up little teenage daughters of newly elected senators as he did during those Senate swearing-ins?  Will he steal a baby's pacifier and put it in his mouth, then swap out a Vice Presidential Coin for it,  which found the baby aghast as the poor swap? 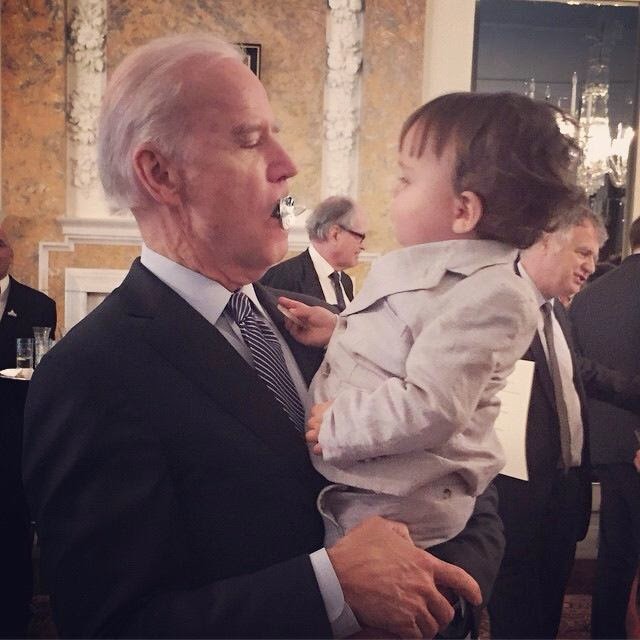 Joe hasn't formulated his election platform yet but he did give the White House press corp a heads up when he said, if elected, he'll scuttle the current press room and restore it to it's previous incarnation as the White House swimming pool.  Joe has repeatedly said he likes to swim naked and he certainly doesn't want to create any press photo ops on that 72 year old body.

Joe has promised not to utter some of his earlier inanities....like "we need more gun laws because we don't have the time or manpower to enforce the ones we have.".  Or "You cannot go to a Dunkin Donuts or a 7-11 unless you have an East Indian accent...I'm serious!"  Or "This is a big fucking deal" (as said on live Mic to Barry at the White House signing of Obamacare)

Joe says, if elected President, he'll carry out all of Obama's policies....that may be the biggest joke of all.

I hope he gets the nomination, he's political poison. I have a feeling we're going to be a run off between Jeb and Hillary though.

If there was such a thing as "less than zero chance" of being elected President, Biden has it locked.

Frank, I agree...while Joe is good for a laugh once in awhile I can't see him as a serious candidate. Barry only chose him because he didn't want anyone to question his intelligence or authority.

Nope. No more Bush's. That name is poison now, too. And what a smart move on Hitlery's part dropping from the Clinton foundation. She must really think us stupid(which 47% are). Like that really will make a difference. You talk about posturing. Maybe they should change the name. How about Thief and Liar Inc?

I've been impressed with Dr. Carson but I don't think he has a very good chance.

I like Carson too, Brian, but his gaffe on gays a few weeks ago shows he's probably not ready for prime time. Maybe he'll get named Surgeon General or Sec. Health and Human Services if we ever get a Republican President.

Sadly enough, I agree that it's going to probably be Jeb & Hillary. Just said that yesterday to my husband and, well, he wasn't pleased with my dismal remark!

Congrats on your views!!!

Wow, that top pic looks like a "Never Talk To Strangers" poster from the 70's.

Yeah, I'm afraid you're right Carol...we have quite a few fringe candidates and I only see Marco Rubio and Paul as well spoken enough to articulate a position.

But Jeb's already got a huge war chest and he can kind of control the dialogue.

Does anyone think Joe is going to take that lying down???

I don't know what Joe is going to do about this, but raise money for Hillary, is NOT IT