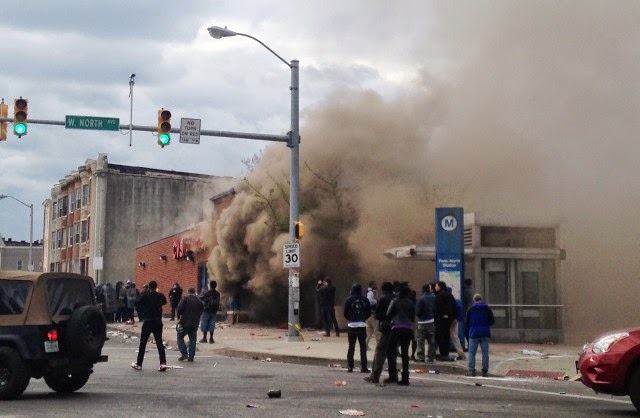 We've all watched Black politicians drag Detroit into a 3rd world city, morally and financially bankrupt, rife with crime, a long line of mayors imprisoned for graft and corruption.  Black leaders couldn't keep the water running, or the garbage picked up, or even provide basic personal protection of its citizens.

Hard on the heels of Detroit's demise, Baltimore, Maryland is simply "Detroit; Part II."  Just as Detroit was a thriving metropolis in 1960, Baltimore, in 1960, was a prosperous city; a safe, low crime, desirable place for folks to live.  In 1960 Baltimore had a population of a million hard working people; 20 percent Black, 80 percent White.    "White Flight" has left Baltimore with half their former population,  overwhelmingly Black.

As with Detroit, Baltimore got rid of the honkey politicians and the Black majority elected city leaders from their own ranks.  And Black leaders rewarded their citizenry with graft and corruption....and the citizenry just got more impoverished.

While Baltimore once enjoyed a robust economy of steel processing, shipping, auto manufacturing and transportation, according to the Baltimore Industrial Association 90 percent of jobs today are low pay service jobs....and too few of them.

Baltimore averages a murder a day and property crime is at an all time high.  Like Detroit, the police force can't protect its citizens...and Baltimore's mayor probably wouldn't let them even if they could.

Baltimore's public school system was $84 million dollars in debt, despite having the highest "per pupil" cost of any school in the nation at $16,000 spent per student.  Nearly half of all students who begin high school never graduate and half of those who DO graduate cannot read or write at the 12th grade level.

So, as we watch Baltimore burn this week.....with the blessing of its own mayor, Blacks scream for more tax dollars...to build more schools that can't teach...to build recreation centers that they can burn down...and for more Black leaders who will give them what they want...to include the freedom to loot burn and destroy.

Note:  A special blog tomorrow on the NFL's "slave auction", better known as the NFL draft.

Just wait until the "illegals" take over Phoenix. Baltimore will look like Utopia!

If you talk to people of color and the white guilt libturds, they say the looting and rioting is justified. No, piecefull protesting is justified not the criminal activity that's happening.

Every turd they catch looting or assaulting Law Enforcement should have ANY guvment assistance they're recieving should be canceled immediately and prosecuted to it's fullest extent.

The Mayor should get her lame ass out of the way and LE squash this bullshit.

Brian, why don't you say what you really feel? :)