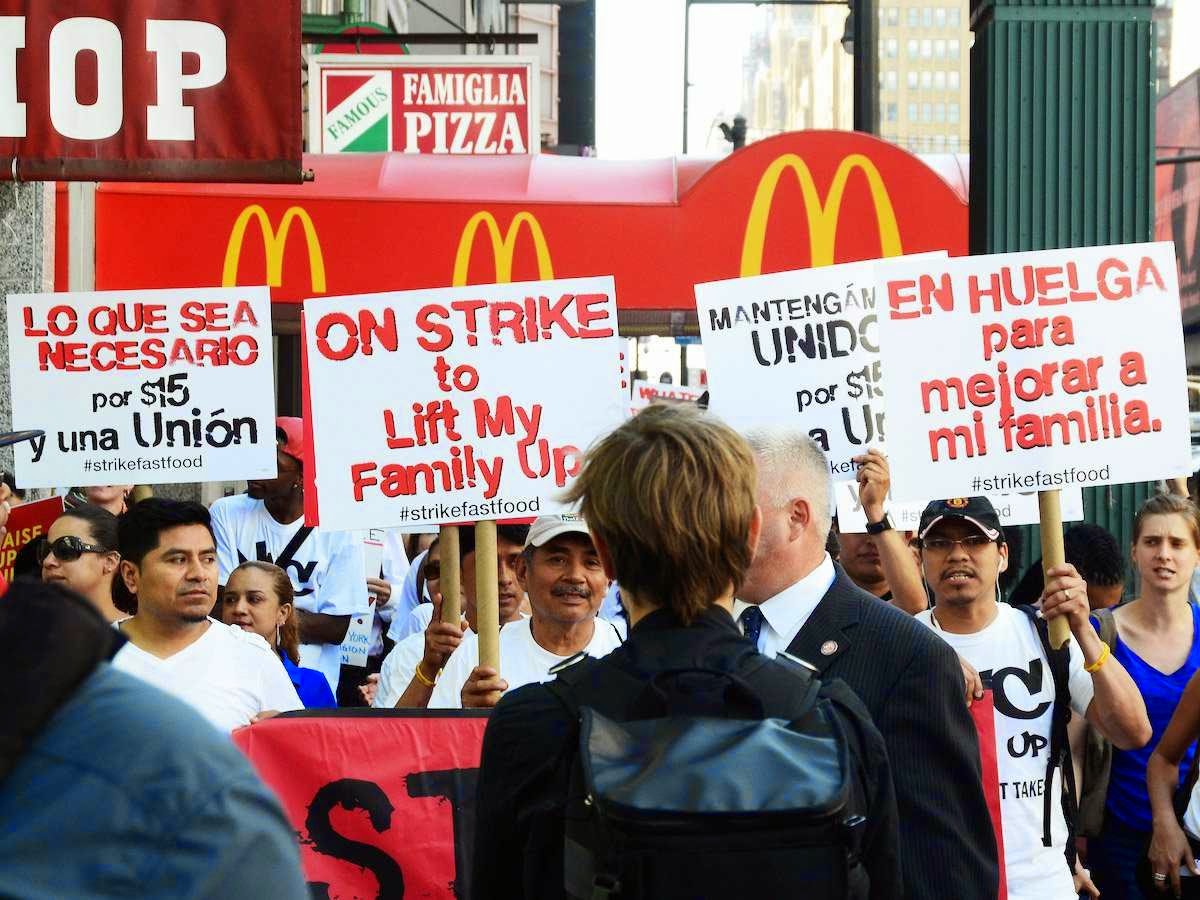 What happened to American courage? With the exception of that courageous 1% who serve in our military, America seems to be peopled by cowards! Did anyone note the "occupier" crowd out in force last week..marching to demand $15 bucks an hour to flip burgers? Take a look! A good majority of them were Mexicans who had the audacity to march with signs in Spanish! And you can bet a large majority of them were either illegal or in Obama's "protection" plan. And, not only do they want us to ignore our immigration laws, but they want us to support their illegal families in the the lifestyle they've become accustomed to....even if it means you pay $10 bucks for a Big Mac! I continually ask why the hell these people didn't stay in Mexico and clean up their own hell hole?

Another question; how is your teenager going to learn a work ethic for later in his adult life when the millions of illegals have taken the only job he's qualified to fill while still in school?

I mean, really, what the hell? Not long ago we would have heaved these illegal assholes into a truck and drove them straight to the border...and we would have torn up those signs written in Spanish and said "we are an English speaking country...god damn it speak English or get the hell out!" And our "greatest generation" would never have tolerated 100,000 illegal Mexicans marching down the streets of Los Angeles demanding to be made citizens!

Yet we read it on the news, then flip over to "The Big Bang Theory" cause we just don't want to be bothered! Hey! If you value your country, if you enjoy her privileges, you better be ready to stand up and fight for it! Whether these illegal Mexicans are right or wrong, you've got to give them credit! They have more balls than the average American! Geesh!
Posted by A Modest Scribler at 2:00 AM

Everyone is afraid of being labeled "Racist" for saying anything pro America. Time for enforcement of our immigration laws and kick out all the illegals from every race. If your native language is so important go back and speak it in whatever country you are from.As Samuel Jackson said in Pulp Fiction:"English Mother F%cker, do you speak it". Thanks for getting me fired up this morning. Have a great day!

Craig, I must admit it was the picture with those Mexican signs that set me off. I've seen them a few dozen times but somehow this one got my dander up.

Time to see how the people REALLY feel about Illegal Immigration. Put on the next ballot: "Should people in this Country Illegally be allowed to stay",
YES () No ().
Very simple.
I know many Democrats who think they should be sent home and not one Republican who thinks they should be allowed to stay.
Let the Peoples voice be heard....Won't happen. The Dems don't want it known how many people(outside of Hispanics) actually support this cause. My guess is at least 75-80% no.

And Frank, I was rather amazed to read that Hispanic Americans aren't that crazy about legalizing them either! On the national issues, amnesty for illegals was way down the list and a significant number of Hispanics are against amnesty. Dems have twisted the narrative to meet their own needs...and are succeeding!

There's just so many hamburger flipper positions available. The Legal Hispanics don't need competition for those important jobs. I get it. A flicker of light just popped into this old guys brain. COMPETITION could be our savior!!

Not in Obama's "Five Year Plan" and managed economy, Frank.

If the Republicans ran ads that explained what bringing in all this extra labor means, they'd get a whole lot of Hispanics voting the other way. Hmmmm

Frank, that's been the Republicans biggest failing for a decade. They can't articulate their positions well, whether it's alternatives to Obamacare or Immigration, or Birth Control.

Then what we have here, is a failure to communicate. They need to quit hiring pansy a$$ed people afraid to step on peoples toes. Now hiring you and I. THAT would be smart. Nothing to lose, afraid of nothing, Barn Burners. That's what's needed here. We'll bring those Clinton skeletons out of the closet and trumpet them to the country. Sounds like fun to me....

Right now I'm watching the protesters in Baltimore. They do nothing to upset me especially the way the illegals are capable of doing. 1 - they have a legitimate complaint. 2 - they have signs in English and speak in English, at least a version I can understand. 3 - they are AMERICAN Citizens and have the RIGHT to protest. My daughter needed help in school and they told her "Sorry, no tutors are available. They are all busy helping Mexicans in the school who need help more than you."

Jeff H....not helping your daughter is blamed on underfunding. What it's really about is not giving American children priority.