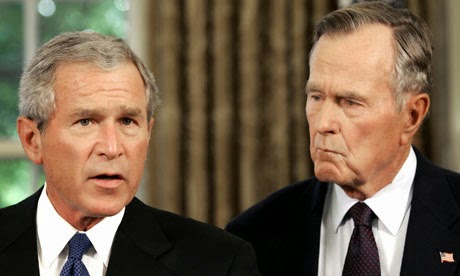 When Ronald Reagan picked George H.W. Bush as his VP,  conservative columnist George Will lamented the pick, calling Bush a lap dog....not a conservative at heart.   George Will prove to be right.  Can we all recall the "Read My Lips; No New Taxes" speech with H.W. on the campaign trail?
Then, as soon as he got into office he bought into the Democrat's deal of raising taxes in exchange for making budget cuts.  The higher taxes came and the Democrats reneged on cuts and ran the budget deficits even higher.

And, as everyone knows, as has happened every time taxes are raised, the economy tanked...tanked well enough to lose George H.W. a second term.

I like old George H.W.  He was a war hero and a decent guy.  But he grew up with a silver spoon in his mouth and never learned how burdened the working man is by big government.  Oh, yes, I know George H.W. left the family compound in Maine and went out to Texas to make his fortune....but let's remember H.W.'s dad gave him a million dollars and said "son, go out and make your fortune."  It's a lot easer to make your fortune with a million bucks in seed money.

So, when George H.W. went out and bought that famous pair of socks, declaring that he's "doing something for the economy", the liberals smirked and voted for Clinton and the Republicans stayed home.

And how about George W., the son?  Nope, not conservative.  Not a lap dog, except to a Democrat controlled Congress who egged him into signing a trillion dollar pharmacy benefits bill that is, even today, fraught with fraud, waste and abuse, and continues to add to Obama's even greater deficits.

A few years ago I wrote a blog entitled "George Bush; The Democrats Best Friend".  I believed it then and still believe it today.  George Bush killed off the Republican party by running up huge deficits, by having few qualms about funneling trillions of dollars to corrupt regimes in Iraq and Afghanistan, by making the huge mistaken effort to democratize Muslim nations...at the cost of a trillion a year,  and eventually causing war weary Americans to abandon the party and put Democrats in charge of Congress and electing Barack Obama.

Now little brother Jeb Bush wants to be President.  While he speaks more eloquently than either his brother or his dad, Jeb suffers from the same malady as the rest of the family....upper class ignorance of the American working stiff.

Jeb wants to legalize some 20 to 30 million illegal Mexicans which disqualifies him from my vote in the primaries (not the general election, as I'll explain).  And Jeb thinks Common Core is just dandy.  And, though he hasn't said, as he hasn't even yet declared his candidacy, I don't think Jeb is going to be any more concerned about balancing the budget as either his dad or his brother were.  He might spend less than Obama but that doesn't cut it in my book.

If Jeb gets the Republican nomination, will I vote for him?  Damned right!  To stay home is to vote for Hillary and there's not a damn thing wrong with picking the lesser of two evils when those are the only choices you have.

But, as for those folks who reflect back on the Bush Presidencies and long for the good ole days; for me, not so much.  Yeah, Barry's spending, and Barry's arrogance, makes the Georges look good by comparison.  But I'm still holding a grudge.  America was "Bush-whacked" three times by the Georges.  They didn't do America any favors and I'll be damned if I'm looking to do any for them.
Posted by A Modest Scribler at 2:00 AM

This might be off the beaten path but I think all this fuss over Hilary this and Hilary that is playing right into her hands. It keeps her in the public eye and everyone knows there's 47% of this country that have a short memory. You're right on in the lesser of two evils statement but you're in the minority. Jeb Bush will NEVER be President. Too many White people get he's just posturing to get the Hispanic vote and too many Hispanics understand it too. The time for something(one) new is now.

From your keyboard to God's ear, Frank.