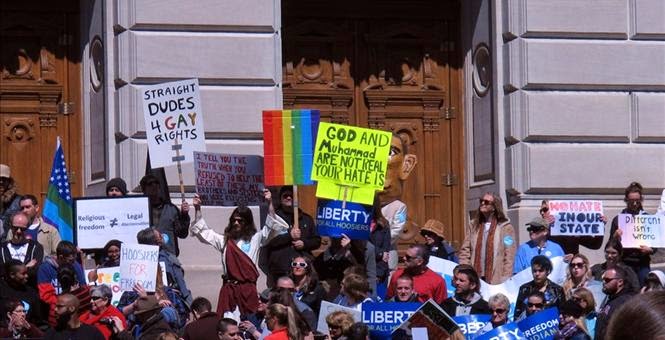 I desperately wish I was surprised by the furor over Indiana's Religious Protections law.  But, America today, spurred on by social media, is just a pack of jackals all ready to pounce on the next newly manufactured social pariah.  This month's flavor just happens to be the Indiana law that attempts to protect religious liberty.

Let me just say first of all that I'm not sure what the intention of the law really is.  Having read the legislation (and I'll bet 90% of those angered by it haven't even read it!), it doesn't do a whole lot to protect businesses that choose not to service gay people.  For example, it would not have saved that upstate New York couple who refused to cater a gay wedding and suffered a $150,000 dollar fine and the loss of their business.  And it would not have saved that Denver bakery that wouldn't bake a gay wedding cake.  The liberal courts have already issued their dictates on that.  So, I can only assume the law is simply a push back against the roaring tide of everything "gayism" that dominates the national discussion...and for a pissy little 3% of the population.

What's ironic about the current uproar is that the Indiana law mirrors an almost identical Religious Freedom Restoration Act, passed by Congress and signed into law by Bill Clinton some twenty years ago.  There's nothing new here at all, except the fact that gays and their sympathizers are now rabid attack dogs on anything and anyone who refuse to celebrate their gayness.

I personally don't care if you marry a Saint Bernard....in fact in many cases you might have a better marital match given America's 60% divorce rates.  However I do have respect for those religious folks who truly take their guidance from their bible, who believe that homosexuality is a sin and they don't wish to appear to be condoning sin.    In simpler, more civilized times we may have been able to find a compromise on this issue.  But the philosophy of the radical left these days is to rape and pillage and take no prisoners.  That leaves little room for compromise and little wiggle room for the religious right.

Sadly, each time one of these social issues explodes into controversy there are always dual issues that come with it; the issue itself, then the matter of cackling jackals that are set off without an iota of fact to judge the rightness or wrongness of the controversy.  There are so many ignorant, uneducated, yet hyper opinionated idiots who simply must get in their lick and tweeter and post and demonstrate and carry signs with "the masses"...who don't understand the issue either!...only that it's not politically correct and "political correctness" is the new religion of the day!

Like I said, I personally don't care if gays marry or not...or if you want to marry a dog or a horse.  But, from a larger perspective, gay marriage is simply another breach in the massive breakdown of the nuclear family....the unit that once brought peace and prosperity and stability to American society.  Is gay marriage alone responsible?  Hell no!  One parent families, fatherless children, hyper-sexed welfare queens who make the taxpayer pay for their birth control failures are all to blame.

It seems to me that the folks in the 19 states who have implemented state versions of the federal RFRA laws are simply trying to fight back against the slow disintegration of American society.  Who am I to tell them that they are fighting a losing battle?

Surprised no comments yet. Great read as always, thanks.

Thanks, anon. Sometimes I think I've written a great piece and find no one comments. Other times, I think I've offered something inferior and I end up getting lots of comments. Very unpredictable.

I am sick and tired of the carpet muncher fudge packer agenda being forced down the throat of society I want to puke. It is high time the 97% get together and not do business with businesses owned by gays, going out on a limb here but the ones that own businesses depend on more than their partners in debauchery to survive.They are not being forced to swallow religious doctrine,so why force their doctrine on others.Tolerant my ass.Happy Easter.

Craig, I agree. But Americans these days seem to be in some massive stupor and the only societal movement seems to be coming from the far left fringes. Pretty sad. Happy Easter to you as well.