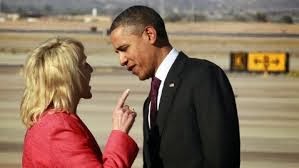 Except for that Joe Wilson fella that called Obama a liar right in the Halls of Congress, I haven't seen any of our leaders who have been brave enough to give Obama hell "face to face"...except our lady Governor Jan Brewer.  Few will forget the iconic photo of Governor Jan verbally assaulting Obama as soon as he took that last step off of Air Force One.  The tongue lashing was a result of Obama's filing suit against the state for our attempts to enforce our nation's immigration laws.

Since that time Obama has totally given up on enforcing any of our immigration laws and has, by emperor's edict given amnesty to over two million of them by totally circumventing the Congress and the U.S. Constitution.  He did it even as a whole corp of Republicans in Name Only stood by and let him do it, neither suing Obama for Executive breach, or even raising a squawk.

By now, I don't think I have to laundry list the entire slate of Obama sins...we are living through some pretty intense Obamacare ills these days.  We're under assault of our personal freedoms by NSA spying and arbitrary dictates from the Chicago mafia.  But it is Arizona who has suffered the most under this President.  He certainly didn't carry this state last election and he hates our "bibles and guns and the flag" mentality.  He and his racist Attorney General Eric Holder has kept federal attorneys in state, suing us for SB 1070, fighting Sheriff Joe Arpao's efforts to jail, then deport the illegal Mexican criminal element, and hates the fact that our Republican controlled State Legislature runs our state finances in balance, even if that means cutting tit-suckers from the public trough.

I think the rest of God fearing, law abiding America owes Arizona a debt of gratitude.  We've carried the brunt of "opposition water" for the rest of the nation long enough.  I believe it's time for the rest of America to saddle up and ride to our rescue.   We are, quite frankly, tired of being the "tip of the spear' on immigration, on personal liberties and gun control.

It would do my heart good to see a million Americans ride out to Arizona, armed to the teeth (and since we have almost no gun restrictions, to include lawful open carry, you'll get no grift here from the law) and show that socialist son of bitch that we're tired of his intervention into areas that are deemed states rights by our Constitution.

We would have no problem hosting you.  You see we've got those big ranchers down in Southern Arizona who have been shot at and killed by the steady invasion on their land of illegal invaders.  I'm sure any one of those ranchers would welcome a million well armed American citizens to come squat on their land for a couple of days or a week if desired.  As a matter of fact, a million of us would no doubt rustle up a hell of alot of illegals as they try to pass anywhere we are congregating.  I'll even bet our own Arizona Praetorian Guard would host the roundup.

Bring your own grub, a back pack, canteens, a light sleeping bag, your personal handguns and plenty of ammo for your "assault rifles"  and we can contract a water buffalo to keep us hydrated.  I tell you, Obama would have "shit fits", seeing a million heavily armed Americans down in Southern Arizona, just a hop, skip and a jump from the porous border!  Hell, he might even deploy the military to the border like we've been asking him to do for years...except he'd make sure the guns were turned on us!

That million man roundup would also be the first signal to a corrupt Washington that America is fed up and that we're more than willing to take Jefferson's advice to shed a little patriot and tyrant blood to refresh our democracy!

So...if any of you youngbloods have a hankering to take back a slice of America, if only for a little while, if you're young enough to have the energy for it, look up the Arizona Praetorian Guard.  See if they can't get a rancher to host, set a time and date and specific place, form that million man posse and saddle up and ride for The Great Million Man Arizona Posse and Roundup!

It would sure do my heart good and if happens soon I'll even come down and join you!

Oh, I LIKE this! Great post, you've gotten my blood pumping this morning. On a slightly different note, is there anyway we can implement border restrictions on these Californians that water down out conservative vote, and bring their failed political philosophies here?

Brian, you would think kalifornia liberals would want to live in the state they made...but like a kid that shit in his own diaper, as soon as he's spoiled it...he wants out of it.
And being liberal, and incapable of learning a lesson, they then come here and go about trying to turn Arizona into Kalifornia.

All my son and I need is a date, and we'll be there. That would be an awesome sight, a million American Patriots armed to the teeth. Kind of makes you giddy. I apologize for those Turds coming there attempting to ruin your state to. Try living here with those ASSES! So frustrating.