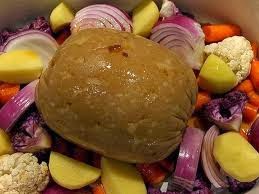 "Selfie" Of A Tofu Turkey

Tofu vs Turkey
There's a nationwide environmental group who are working their tushies off trying to get America to fore go Turkey at Thanksgiving.  They complain that turkey farming ruins the environment as fertilizers and antibiotics are flushed into the ground water supply and creates all kinds of other havoc.

The local branch of the anti-turkey brigade here in Phoenix are going as far as giving you coupons for two free packs of tofu, a recipe for delicious Tofu Turkey and an environmentally friendly, reusable shopping bag so that you might cease and desist from using those plastic bags that are seemingly hard as hell to recycle.

Now I admit that I like tofu when it is prepared with an oriental stir fry, or in tofu soup, which is excellent.  But I can't see tofu turkey ever taking the place as that golden crusty turkey at the centerpiece of my Thanksgiving dinner.

"Selfie is tis newest word recognized in the Oxford Dictionary.  For those of you who don't know, "selfies" are those ridiculous "in your own face' pics that people take of themselves and send out to social media.  The world is not amused...or enriched.


First of all, for the many who wrote me, concerned about the elderly 82 year old Sun City gentleman who killed his wife; you will recall his elderly wife had been going through a third bout of cancer and also had MS and was slated to go back into the hospital, a fate she abhorred.  She begged her husband to take her life and end the pain and suffering.  So he did.  Then got up from the bed with his dead wife, called her caregiver first, then called the Sheriff's office and told them what he had done.  In court he didn't know whether to plead guilty or innocent and asked the judge for guidance.  He was eventually found guilty and was sentenced to two years of probation.

(Note:  this is not the guy who, a few months ago, killed his wife and tried the same gambit...he had told too many of his neighbors what a bitch he thought his wife was..he'll be facing a harder fate.)

My Favorite Description of "Home"

At night across the mountain when darkness falls
and the winds sweep down out of the hollows
the wild things with their shiny eyes
come to the edge of the clearing.

At such an hour the house seems safe and warm
a island of light and love in a sea of darkness.
At such an hour the word 'home' must have come into being
dreamed up by some creature that never knew a home.
In his yearning there must have come to mind
the vision of a mother's face,
a father's deep voice,,
the aroma of fresh baked bread,
sunshine in a window,
the muted sounds of rain on a roof,
the sigh of death,
the cry of a newborn babe,
and voices calling "goodnight".
Home, an island, a refuge, a haven of love.

Cuzzy wuzzy I think I have to disagree with part of this. I feel like, my life at least, would in fact be enriched by seeing a selfie of you on my Facebook page!! :) ;)

Tammy, sweetie...it would scare the children!