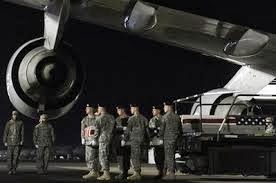 As the coffins are flown in the dead of night into Dover Air Force base, the honored dead are escorted personally by a member of their unit.  This is as it should be.  Taps are not played, no martial music can be heard as each coffin is removed from the cargo bay and transferred to a van that will take them to the 436th Air Transport Wing's Charles Carson Center for Mortuary Affairs.  It is there where the real heartbreak will continue. 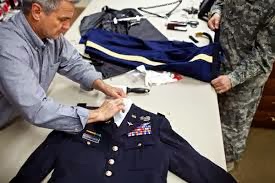 The Air Force Mortuary is the largest in the Department of Defense.  Comprised of both military and civilians, these people do "the dirty work", the hard part of opening that coffin, experiencing the shock and sadness of those who died so tragically young, some of the bodies who seem so miraculously untouched that one wonders about their death, others so mangled that it literally breaks the heart of those processing the body.  Feelings are so intense that often the chaplain must be called; to buck them up, to listen to the immense sorrow, of dealing with lingering depression of witnessing such tragic youth death on each and every dark night in that mortuary.

The mortuary techs will clean the corpse, mend the mortal tears of tissue and muscle and do their best to assemble a corpse that will hopefully resemble a human being.  Sadly, too often that cannot be done as IED's and mortars and rockets show no mercy.  But the techs do their best...all the while strangling on the bile of doing a job dozens of times a week, a job no one should have to do.  For it is far easier applying powder and rouge in preparing a civilian corpse than it is to prepare and dress the body of those so young, so battered, so undeserving of a death that came so early. I read of a young female Air Force Master Sergeant whose job it is to fit the dead for a uniform to see the dead home, to be buried in some small home town across the country.  The Master Sergeant will lovingly pull a pristine uniform from a rack, fit it to the honored dead, check the records, then assemble the appropriate rack of medals to be pinned to the dead chest, and, when finally outfitted, lovingly brush a hint of lint from the uniform, before sending them on their way to a final resting place.

God Bless these heroes who see the true costs of war every night in the deathly quiet of a hangar at Dover.
Posted by A Modest Scribler at 8:17 AM

I'm typing this though a cloud of tears. I know more than once you have spoke of quitting your blog. I hope you reconsider that. You open eyes to places I know I have never even considered until arriving here.

I do hope there is a God and those you spoke of here do find an eternity of beauty and bliss. They are way too young to have met such a tragic end. Thank you

Things are looking, better Ken. I have 13 new "followers" and Craig's list has lifted their ban on embedded links so i can continue to promote my blog. I still want those "followers" on the left side.

Need I say how much I appreciate your comments? I'm such a "slut" for comments...love to hear I touch someone's heart.

Deareal, many times you have touched my heart. You are such an awesome scribe. What would you do if you quit writing your blog? Sit around and watch TV!
Keep up the great work Cuz, we deserve it. Lol