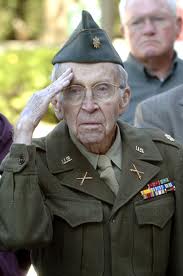 Veterans.  We are millions strong.  We all have our own unique memories of war.  Some of us fought on the frozen and barren hillsides of Korea.  Some of us in the sweltering jungles of Vietnam.  Many endure the searing heat of an Arab desert or in the heights of Afghanistan, clawing tenuously to hold a mountain pass.  An ever-dwindling cadre of "Our Greatest Generation" can still recall the frantic hell of Omaha Beach or winning beachheads inch by inch at Iwo Jima or Guadalcanal.

Yet, we are a brotherhood.  We don't march in Veterans Day parades to tout our service but to remember those who didn't come home.  No parade, no Veterans Dinner and no campaign medal will ever serve to ease the angst; of fear, despair, pain or loneliness of the war front.  As we came home some of us were cheered, some of us were kissed and some of us were kicked and spit upon.  It doesn't matter now.

We are far too busy fighting with the VA to receive medical treatment for Agent Orange.  We are far too busy learning to live with Post Traumatic Stress Disorder.  Many are occupied with learning how to use artificial limbs.  We have problems because our Congress and our Commander in Chief acts far too quickly to send us in harms way, yet far too slowly to assist us in binding up our wounds if we are fortunate enough to return home.  Those who didn't make it home are flown into Dover Air Force Base in the dark of night so that America does not have to see the true costs of war.   They are then escorted to grave yards across America so that they may achieve their final and honorable rest.

The one consistency in this exclusive "force of millions" is that we understand, while those who haven't served will never understand.  Most Americans can never even conceive the degree of fear and loneliness of leaving your family for five or more years of your life; to not have the chance to hug and kiss your children and tuck them in for the night.  Most will never understand the brotherhood that is formed when you serve in danger with a team that is, rather than trying to score a touchdown, are trying to keep each other alive.

I'm no longer a "betting man" but I would venture this:  If our Commander in Chief were to announce tomorrow that, heretofore we'll use our old men to fight our wars, and spare our young, there would be a million of us who would claw through the old trunk, pull out our old uniforms, hitch up our pants over our beer bellies, and head out to the war front.  Those of you who never served will never understand that, but we do....we're Veterans.
Posted by A Modest Scribler at 1:56 AM

Awesome blog, Just!! And so true. To you and all vets- thanks my brothers and sisters!!!

I want to thank you brother for your 22 years of sacrifice to our country. I read your blog often and I realize from reading it that you love your country and wish there was a way you could help fix the awful things that have gone so terribly wrong. If our country had more people as caring as you are we would be in a much better place. Again thank you for your service to our country and for caring enough to write this blog daily

Thank you Grenadavet and thank you brother John. And I love and respect you for your many years in Law Enforcement trying to keep our community safe. Happy Veterans day to you as well.

Thank you for your ever meaningful stories. Thank you most of all for your service to our country. While it is in a state of distress right now, America is still the greatest!
Thank you to all of the veterans who served, protected and even died for the right to call America their home.
We can sleep at might because of your sacrifice.

Thank you for your service as well, cuz...hope you had a great time at the lake.