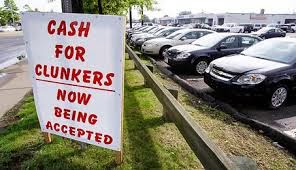 Well, the Business Section of the Arizona Republic on Saturday was good enough to issue the final report on the great Cash for Clunkers program of 2009...you remember that one...it was part of Obama's stimulus program, highly touted as a program that "put Americans back to work".

Well, it seems the Brookings Institution was paid by Obama's minions a huge chunk of cash to confirm the success of this Obama phenomena.  Brookings reported that the program boosted auto sales for all of six weeks during the summer of 2009.  Cash for Clunkers cost the American taxpayer $2.85 billion dollars and when the funds ran out auto sales plunged to pre-Clunker levels.

The average rebate given was $4,200 dollars and, sadly, a post Clunkers questionnaire revealed that nearly everyone who participated in the program had already decided to buy a car that summer, and would have done so, rebate or not, since their old cars were on their last legs.

Keep in mind, Cash for Clunkers was a jobs program.  And how many jobs did it create?  None in the private sector...it seems it did allow Obama and Company to hire a few hundred more federal bureaucrats to manage the program....at a cost to taxpayers of $1.4 million per  job.

And what happened to these newly employed federal bureaucrats when, after six weeks, the program funds ran out?  Well boys and girls, Obama somehow found enough federal funds to keep those bureaucrats at their desks right into 2013.

And what have they been doing all this time, considering all those clunkers were supposedly already clunked?  Well, it seems the Cash for Clunkers bureaucrats had to stay on the job to monitor the progress of the Brookings Institute study of the program's "success".

Sadly, we learned that many unscrupulous auto dealers didn't "scrap" the cars, as promised.  Thousands were re-sold and put back on the road, belching smoke and exhaust fumes all the way.

Sadder, the Office of Employment and Population statistics reported that auto workers continued to lose their jobs for over a year after Cash for Clunkers was over.

Aren't you glad I can offer you this kind of news?......after all, it takes your mind off of the Obamacare fiasco, if just for a little while.

I think I might have another "cash for clunkers" program that Obama might embrace.  Since he has robbed the Medicare Program of $500 billion dollars to pay for his voter supporting tit-suckers, perhaps Obama can light a fire under that 15 member death panel and start shuttling off old folks into hospices in lieu of expending federal dollars on their health care.  This way Obama gets millions of old "clunkers" out of the healthcare system for a little euthanasia session at the local hospice.

This program has taken a lot of used cars of the market and has driven up the price of used cars. I personally don't buy new vehicles so used cars have been the answer for me, well it would seem Obama found one more way to stick it to me.

The program most likely had secondary effects tat few outside of t hese industries, know, see, or even know how to research: replacement parts and repairs. I remember small repair shops faltering or going out of business. So for ever 'rich' dealer who MIGHT have been helped a small mom and pop transmission shop or other, got hurt.

Every concept of Obama's is completely removed from reality. Cute IDEAS and THEORIES, but just that. Nothing realistic.

anon, that's why having big government running the economy is so inefficient and harmful...the free market has its faults but is the best we've ever invented.