"Bringing In The Sheep" 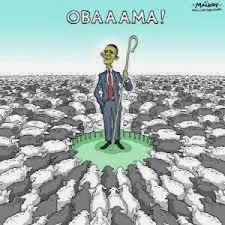 Last November Barack Hussein Obama was able to bring in his dumb sheep to once more give him an electoral victory.  He won it by assuring his sheepies that employment was right around the corner, that the economy was a hair's breath away from booming, that he knew nothing about Benghazi and the NSA and IRS scandals had not yet been revealed.  And he promised they would love Obamacare...and if they didn't, they could keep their old policies.  And he got just enough women who lusted after free birth control, gays grateful for Obama's blessing on gay marriage, and sheepies who swallowed the Obama kool-aid en masse to win the election.

A year later we find the Fed is still pumping $70 billion dollars a month to keep the economy inflated, unemployment has not gone up higher, only because a few million more people have left the work force forever, women are finding that getting free birth control pills is not a fair trade-off for financing the medical needs of millions of life's losers who found it charming to quit school, breed like rabbits and embark on a career in green check tit-sucking.  And now some 15 million sheepies, and their families, have now had their health care policies cancelled and are left without coverage on the side of the road, or forced to pay as much as three times the costs of their old policies.  And the sheepies are scattered over hell and over and they are now paying the price for being an Obama sheepie.

You see, Sheep aren't very smart.  They can be easily transfixed by cheap shiny objects and cheap empty rhetoric.  They threw away all the facts; that Obama had not accomplished a single thing in his first term, that he had proven to be a "man-child" follower, a coward who hides in the shadows when he gets busted for Benghazi or NSA spying, or using the IRS for political gain.

Nor were the sheepie even a bit suspicious when Obama front loaded the benefits of Obamacare; children staying on their parents policies, no pre-existing condition restrictions, and loaded all of the pain until after his re-election.  Were they that stupid not to expect that Obamacare was not as wonderful as Obama portrayed it?  Yes they were.

I have read with great delight the moanings of these sheep as they received their policy cancellations and their premium statements for Obamacare, double and triple what they were paying for a policy that worked for them.  No, it didn't include paying for birth control pills for that post graduate college student that moaned about it before Congress last year...yeah, the one used to demonize Mitt Romney for not believing you should have to pay for the sex lives of millions of American women, but the old policy cared for their medical insurance needs at a reasonable price.   Romney wasn't against birth control; he just didn't believe Americans should have their health premiums increased to pay for others breeding habits.  And apparently the sheep don't either now that they have received the bill for it!

Note to the now straying Obama sheepies:   Your premiums are doubling and tripling to pay for "million dollar a year" health care costs of gays who practice unsafe sex, you're paying for condoms and birth control pills and abortion support as well as another 30 million tit-suckers added to absolutely free Medicaid.  That's why your bill has tripled...and that's why ten years from now, your bill will have gone up ten times more....because...see if you can get this...the free market, no matter its faults, will always deliver lower costs, more efficient management of your money.   Medicaid Program?  Broke
Fannie Mae?  Broke.  Freddie Mac?  Broke.  Welfare?  Broke and driving us an extra trillion dollars in debt each and every year under Barack Obama.  Student Loan Program?  A trillion dollar in student debt that economists say will never be paid and will further burden the American taxpayer.

And Obamacare?  A huge fail.  A huge slice of the American economy now under control of Big Government, $25,000 dollar a year premiums for working Americans to pay for those who won't.

And the Sheepies are wandering in the wilderness and wondering why their shepherd lied to them.

I am trying to figure out what country to move my family to. This country is done. I will never be able to afford to live out the rest of my life he

Actually, anon...some day you will be able to afford to live here because the perfect storm is coming for an economic collapse. Then everybody suffers for ten years or so, the money has a different value and we learn to live with it....that is, of course, if China doesn't come calling and wanting to be paid!