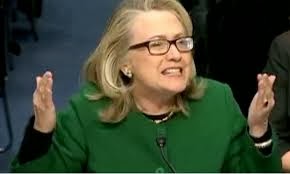 Hillary Rotten Clinton, fresh off her receipt of a "hero" award for her handling of the Benghazi crisis, was in Los Angeles the other day to receive the Hermandad Award from the illegal Hispanic community of "Northern Mexico-Southern California".  For those of you who don't speak Spanish, "Hermandad" is Spanish for "lay down, spread your legs for la Grande Mexican screw".  Given each year to the American gringo who most epitomizes the open borders/amnesty advocacy "love-nik"

Hillary was bubbly and effervescent and spoke about how much she likes enchiladas, tacos, mariachi music and solving the Angelino parking problem by parking three cars on the front lawn.  She said, though she has not decided to run for President in 2016 yet, if she does she would certainly appreciate any fraudulent illegal Latino votes they can muster up for her.  She also pointed out that, if immigration reform didn't happen this year, "undocumented immigrants" could secure a whole set of American papers down at Poblano's Laundry, Liquor and Paralegal Service down on Figueroa Street in the barrio.

Ms. Clinton then said that if she did run for President, and if she was elected, she promised them a dozen tamales in every pot and a government sponsored Detroit initiative to supply low-rider parts to every barrio in America.  She said, if elected, there would be no more of this silly "press 1 for English, press 2 for Spanish"...since if Americans couldn't understand Spanish by now it was high time they learned.  She also promised she would build water fountains and a Filberto's every two miles along high traffic desert migrant routes from the Mexican border to the nearest U.S. Sanctuary city.

Ms. Clinton's speech was met with wild applause, whistles and the popping of decorative pinatas.  As she left the stage she passed out colorful Spanish language fliers; one side provided specific instructions for "the undocumented" to apply for American food stamps....the other side printed the address and phone number of her political PAC and campaign headquarters, along with a currency chart for both dollars and pesos.

Ms. Clinton was then whisked away in a limousine en route to meet with the new Los Angeles mayor to discuss how more federal dollars could be channelled to the city to offset a $500 million dollar budget deficit.

Viva Hillary!  Viva Hermandad!
Posted by A Modest Scribler at 2:00 AM

Please excuse my language:Get that worthless fucking ugly cunt out of kalifornia. Worthless gutter whore. Have a good day!

Well said Mr. Bailey! Ya Modest, what he said, double!

What a way to talk about our next Commander In Chief!

If she gets in we will all be biting our tongues, I've no doubt she will rule with an iron fist