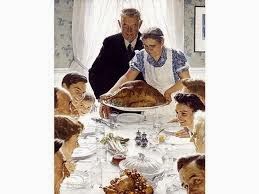 The other day I spent a good two hours on Ree Drummond's, i.e. The Pioneer Woman's website.  I've been a follower of her web site for years now and sometimes watch her program as well.  Have even attempted to prepare some of her recipes.  The other day I was "teased" to her site by a Kitchen Aid mixer she was giving away, simply by commenting on where you'll be spending Thanksgiving this year.  (don't even know what i would do with a mixer!)

After checking to see if my comments had been recorded, and that I was Kitchen Aid eligible, I got caught up in the wonderful comments offered by folks from all over America.  And I was either elated or saddened vicariously by folks who were deliriously happy to be uniting with family, or saddened by circumstances this year that would keep them away.

Some folks were staying at home and serving as caregiver for a spouse suffering from alzheimer's dementia, or sharing the Thanksgiving dinner at a hospice in honor of loved ones who would soon depart this world for another.  I was saddened to read of a 75 year old lady who was spending the day in the hospital with her brother who was undergoing his second round of chemo and radiation.  Another family would dine in a hospital cafeteria as they waited on the test results of their son.

Still, while there were indeed many sad instances, there were some 7,000 plus responses at the time of my visit and the comments were overwhelmingly joyful…so much so that I was able to cast off the worries of my country and celebrate the joy of being apart of a country peopled so bountifully with wonderful, loving folks.

There were mom and pops excited beyond measure that their kids were coming home for Thanksgiving.  There were grandparents waiting to get their first look at the new grandchild.  There were grandchildren reveling in the fact that their 88 year old grandpa would indeed carry on the tradition this year of hosting a whole tribe of family!  There were playful Texans who were giddy that they were hosting so many family and friends that the "dining area" extended from the dining room, out into the garage…and into the drive-way if necessary!

There were "retail orphans"; families who had at least one member working in a retail store in order to satisfy the greed of folks no longer satisfied with Black Friday, but had to have Black Thursday as well.  Their families would be home having dinner alone.

And there was family after family who were having their Thanksgiving dinner at fire stations and police stations with their "larger families".   There were that many more who were having their holiday dinner in a homeless shelter…after they had served the wanting.  There were church groups hosting the lost, lonely and destitute.  One 70 year old lady said she'd be alone but didn't mind because she would delight in the memories of a lifetime of Thanksgiving dinners with those who are now gone.

There were homilies more specific; glorious praise for grandma's berry pie, an Aunt's chocolate cake, or a pumpkin pie, or hosannas to giblet gravy or turkey stuffing, or home-made cranberry sauce.  But mostly there was just the offerings of boundless love for family and friends getting together for this special holiday.

I've heard and read many times of folks who get out into our wonderful country, and rub elbows with ordinary folks, and come away elated by the buoyancy and resolve that folks in the hinterland display, even in the face of tremendous challenges.  I've got to believe that is true.  Just with a a two-hour scouring of some 7,000 comments on the Pioneer Lady's website left me smiling…and so very hopeful about our future.

And yes, I lusted after all those comments and followers and wish I had just a fraction of them.  But then, I can't offer a good recipe for enchiladas or Sunday evening pot roast!  So, on this day of Thanksgiving let me be thankful for all of my dear readers…folks who visit me every day and have written so kindly of my efforts.

Dearel, thank you once again for your writings. They are wonderful words that I can only wish would come to me hen I sit down and try to think of something to say.

I hope you have a wonderful day today and a very special Holiday Season.
Thank you for ALL of your blog posts. They say volumes to describe our Country, families and feelings on many subjects.

Happy Thanksgiving Cuz, I hope to see you someday soon.

Good morning, cuz! Thanks for 'nicies"…just gives me encouragement to keep on keeping on! Happy Thanksgiving to all my dear family out there!

Wishing you and yours a very happy Thanksgiving! Your writings are greatly appreciated, no matter how many followers you may have. Thank you for my daily dose!

Thank you, anon…and thank you, dear Carol..have a joyous Thanksgiving.

Happy Thanksgiving to you as well, Rebecca.

Happy Thanksgiving and thanks for your scribblings.