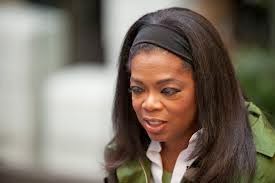 Last week, while shopping for $200,000 dollar Gucci purses in London, Oprah Winfrey stopped to pontificate on the state of race relations in America.    Commenting on Barack Hussein Obama's crumbling poll numbers, Oprah opined that the only problem with "The Anointed One" is that White people are prejudiced.  She furthered offered the solution to ending racism for ever; she said that racism won't end until a lot more White people die.

In a way I can see her point.  The liberal ilk have managed to insinuate themselves into the school system and indoctrinate our children into believing that Blacks are some measure of "Super Race" who, having a great, great, great, great, great, great grand pappy who lived under slavery, entitles Blacks to a lifetime of preferential racial quotas,  a green check and food stamp card for life, and a permanent "liberal pardon" for urban Black criminal behavior.   And let no one question Black prejudice when a Black candidate gets 96% of the Black vote!  Or in the corrupt urban Black precincts in Cleveland, Detroit, Baltimore, and Philadelphia Blacks awarded Obama an impossible 115% of eligible voters!...with not a single vote for Whitey!

So, having administered the grand liberal "kool aid" cure, the only thing standing in the way of a lifetime pardon for wanton laziness, reverse racism, a right to whine and generous government benefits is a small contingent of older White Americans who cling to a moral code and still remember the old American work ethic.  Once they are gone, according to Oprah, Blacks will be free to fail at fantastical rates and never be criticized a moment for it.

I guess my question would be "how would Oprah know?"  I mean, let's face it, Oprah made her billion dollar fortune by being two things, a non-threatening, semi-literate Black woman for whom White women could embrace and shuck their collective White race guilt in doing so.  She hosted an afternoon television talk show that pimped books and made it alright to worship materialism.  She even pushed luxury product manufacturers to kick in "lots of 300" so that she could give Ipods and I Phones and cashmere sweaters and scented feminine douche to 300 greedy, adoring American women on Oprah's Favorite Things" Day.  And take away the gloss and the Oprah show was no different than Jerry Springer.

And Oprah loved to play up her "woe, was I poor" schtick.  It did not matter that my family was as poor as Oprah's...or that a hundred million Americans were just as poor...it was only tragedy because Oprah lived through youthful poverty.  And if Oprah was mistreated as a child, if only on occasion, well that was certainly deserving of a whole show, wasn't it?  And surely Oprah must be a good person because she has a hundred $200,000 a year toadies tell you it is so!  And that regurgitation was always prominent on the Oprah Winfrey show!

So Oprah, after twenty years of toil in a plush television studio, had at last earned the right to be "right in all things",  "wiser than anyone else" and had earned the right to declare "what is what" and "whose racist and whose not".  Just as it has earned her the Medal of Freedom this week, just as it has earned her "Hollywood Illuminati" status who can now tell you who to vote for and lecture you about your poor political choices.

Alas, the reality is quite different.  Just as Obama hubristically flew too damn close to the sun, in his arrogant abuse of power, Oprah too has lost her luster as she deigns to play "God" and determine what is in our hearts.  She too has donned the wax wings and flown too high into the sun.

A few years ago, long after Oprah had earned her first billion, she and BFF Gail decided to take a road trip across America.  I watched that show and I'll be damned if Oprah wasn't as lost in the every day world of America as Queen Elizabeth would be skirting across the miles in a Hertz rental car.  Oprah could not operate a gas pump, was not shocked that gas was $4.50 a gallon in the middle of the Mojave Desert, could not register herself into a hotel room, thought Olive Garden "quaint", had to use a valet to park her car and needed Gail to tell her how to operate the car radio.

Oprah Winfrey has reached that rarefied atmosphere, that ultimate high place that only billionaires can reach; the total alienation from the outside world, the every day challenges of blue collar America.  She has such great wealth that she can build herself a girl's school in Africa, as a monument to her greatness, and she can donate 1% of her vast wealth to charity...and buy complete forgiveness for owning and living in a dozen hundred million dollar houses and buying $200,000 dollar Gucci purses...even as a million people a day die of starvation.

But greatest of all, Oprah can now proclaim who must die for the ultimate good of the Black race.

I have never seen the Oprah Show!
One of my pleasures in life.

She doesn't do anything for me. Never did care for her. Way too fake.
Anyone who thinks all the crap she gave away was out of her pocket is mistaken anyways. Everything was donated by the manufacturers trying to get their product out there and wrote it all off on taxes.

Thanks, never have had any use for ofra, especially her holier than thou attitude and racist bs.

If it wasn't for the white man she would still be in the get to where she belongs.

White people are the ones who have made her rich, and are responsible for supporting her White hatnf rhetoric.

OK, I'm just a dumb white guy so when I want some intelligent answers I go to the most intelligent black guy I know, Thomas Sowell. Now I'm just kidding there, he is an amazing man and boy does this interview address this topic in a great way, hope you take time to watch!

Well, from the responses today I see that I'm not the only one who fails to worship the great Oprah.

Ken, I read Sowel everyday. A wise man..and one who campaigns against our own destruction every day and does it eloquently.

Who is this "Oprah" person? Is she someone important?

I have to applaud your great post, great analysis of the truth! Kudos to you. I only regret that this truth is not widely known by the majority who still fall for those traps.

She's pissed with white people cause her daddy used to pimp her out to old white men when she was a teenager.