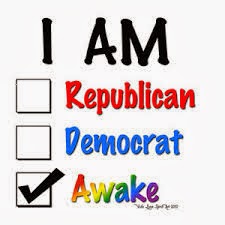 Now, since the massive illegal invasion into California, that state is wildly liberal Democratic with very small pockets of Republican districts, most probably on their way to extinction within the next decade.

I now live in Arizona and have become fascinated by the diverse polyglot of political preferences, seemingly driven not by geographic area, nor even totally by demographics...at least the way we have always looked at them.

Arizona is still largely a conservative state...and yet the Republican Party has been splintered by those who have left the party and declared their voter preference as "Independent".  I dropped my affiliation with the Republican Party and went "Independent" in 2004.  I just got tired of wasting our national treasure on Middle East wars and Republicans in name Only (RINO'S) who were spending nearly as much as the Democrats.  About a third of the Arizona electorate now register as Independents, with the biggest block of voters remaining Republican, with Democrats bringing up the tail, but not as far behind as they used to be.  We've gotten our share of California transplants who are liberal, have soiled their California diaper and have now fled to Arizona to do the same here.

With respect to geographic patterns, Arizona seems to follow none.  Tucson is largely liberal Democrat, fostered by a large group of Hispanics and the liberal campus at the University of Arizona.  Come north to Phoenix and Maricopa county and you find the county is largely conservative with pockets of liberalism sprinkled throughout the county.  Central and South Phoenix politics is driven by a significant gay community who, paired with minority Blacks, liberal lawyers, and Hispanics constitute the strongest liberal element in the county.  Maryvale, a virtual Mexican barrio would be liberally influential as well if the majority of their citizens were legal, which they are not.  Glendale and Peoria is a rich mixture of all party affiliations since both have both a growing Hispanic community as well as upper middle class residents with an eye on government spending.  At the far west we have Surprise, Arizona which seems to have incorporated themselves as a modern day version of "municipal whore" since the council focuses nearly all their attention on attracting business and growing as fast as they can.

Scottsdale (Or Snottsdale as the average Joe brands them) and Paradise Valley, both of which used to celebrate their western tradition of conservative thought, now is populated by old Arizona money, largely conservative, but many new rich California transplants who live green, go vegan and champion liberal causes.

With the exception of Flagstaff, anything north of Phoenix is populated by old line Republicans and vote conservative in every election.

Barack Obama and his minions believe they can turn Arizona blue by the next election.  I doubt that.  Our state legislature has been controlled by Republicans for decades.  However, the Democrats have had some success in bluing the state a bit as we now have two U.S. Senators who have decided to bow and kiss collective Hispanic ass by championing illegal amnesty, John McCain and Jeff Flake.

I believe Arizona is safe for conservatives, at least for a while.  However, this strange polyglot of political preferences may signal a change in a few decades.  After all, the state of California went from being the most productive, the most prosperous, the most functional state in the union, to being a totally non-functional extension of a third world country.
Posted by A Modest Scribler at 2:00 AM

Don't forget the whining pc crowd here in kalifornia.(I didn't capitalize, someone will be offended)I know a couple of young conservatives, 19 year old girls, there is hope.

Craig, don't know if you saw the news this week but Apple, while keeping their shiny crystal palace HQ in California, is opening a huge manufacturing facility here in Phoenix...cheap labor, cheap utilities, low taxes.