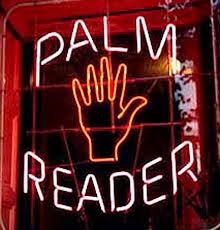 Last week I read that the Obama Administration is cracking down on gypsy fortune tellers (I'm not making this up folks!  (http://wildhunt.org/2007/05/shutting-down-psychics.html).  Spurred by crackdowns in Philadelphia and New York City, the Commerce Department has decided to lower the boom on psychics and fortune tellers.  In New York City they are proposing that gypsy fortune tellers submit to a DNA test to determine if they have any gypsy blood in them.  In Philadelphia the new law has already closed down 16 fortune telling businesses and more closings are expected.  The Commerce Department is demanding that all fortune tellers be licensed but no one in the federal bureaucracy has yet figured out what questions to pose on a licensing test.

Well, I was a bit taken aback about this and wondered if business had been affected at our local fortune teller up on Geezer Square in Sun City, Arizona.  Star Sophia has been operating out of a defunct and dilapidated former  coin laundry for as long as I've lived here.  So, to keep my dear readers warned and informed, I thought I'd drive on over and have a little chat with Star Sophia.

When I pulled in to the parking lot I was fooled for a moment, thinking the shop was closed.  Then I noticed the neon "eye"and giant palm all lit up and got out and went in.  Star Sophia is one of those women of indeterminate age; olive skinned with not a trace of profound wrinkles about the eyes or forehead, and quite spry, as she leaped up from her chair and extended her hand in greeting.  She had rings on every finger and wrist baubles that clanged noticeably as we shook hands.  When I told her I was there to ask about the imminent crackdowns on psychics and fortune tellers her smile dimmed a bit and she made a clucking sound with lips and teeth as her mood darkened.

Star Sophia lamented that she had received a letter from the Department of Commerce that proscribed a "prediction fallibility rate" that would go in effect at the first of the year.  She said Uncle Sam is demanding that she be at least 80% accurate in her predictions or be subject to a government shutdown.  Adding more pain, crystal balls will incur an Obamacare tax of ten percent. When I asked Star Sophia if she thought her business could survive with such low fallibility rates she smiled and said "oh, we have to make adjustments and I have done so, already".   She added "besides we've got a guy who won two terms as President and nothing he predicted came true!"  "He survived with a '0" prediction reliability rate!"

I then asked her if she would read my fortune and she readily agreed, providing I fork over $15 dollars "just to keep it legal".  So, money exchanged, here were my questions, followed by her responses...verbatim:

Me:  "Will my blog ever reach superstar status?  Will I cultivate hundreds of followers and thousands of daily readers?"

Star Sophia:  "At least two people will be crushed to death at Walmart on Black Friday...to save $30 off retail"

Me:  "Alright, will I be doing any traveling in the coming year?"

Star Sophia:  "President Obama will blame Republicans and Health Care providers for the cancellation of millions of personal health care policies all across this nation".

Me:  "But that is not what I asked; I asked if I would be doing any traveling next year".

Me:  "I'll take that as a 'no'...okay, let's try another one "will the Republicans win control of both House and Senate in the 2014 mid-term elections?"

Star Sophia:  (Nearly digging her nails into my palm this time) "Ah..yes!  By this time next November Americans are going to be feeling the pain of the pocketbook, from further jobs cuts, cuts to the Food Stamp Program, high gas prices, high electricity prices, higher tax rates, sky-high medical premiums  and further trouble in the Middle East, so yes, Republicans will take both Houses of Congress............unless they get a few nuts talking about women can't get pregnant during rape, or that they should close their legs to prevent rape, or if the national conversation returns to the subject of Obama's birth certificate, or if they choose to shut down the government again, or if they run a slate of candidates with a collective IQ below 80.....

Me:  "Ms Sophia, it seems to me you're not being fair...you either failed to answer my original question or you have intentionally qualified your answer, or, when you do predict, it is for things that happen every year anyway!"

Star Sophia:  "Look chump, I have to stay in business and I have to satisfy that 80% infallibility quota to stay in business...I'm taking a cue from this President; "blow smoke, blame someone else, qualify your answers, misinform, and state the obvious, and demonize the opponent.   I gotta a family to feed!"

With that she disengaged my hand, pocketed my money, and handed me a small pamphlet.  It read;  "Psychics guide to cracking the Obamacare software code and completing enrollment".  "Please take this along, Star Sophia said, "my brother  in law's in the software business!"

I am a "liberal" and I read you to see what the "opposition" is doing, also to thank you for being a veteran and defending me while I was playing with college girls so many years ago. But you made me laugh! Nice post and I am not sure I could disagree with it.

Thank you, Jerry. You are more than welcome to be our "house liberal". Of course, you realize my blog is drawn in stark black and white...no room for shades of gray because the Obama/Reid/Pelosi regime has proven to be the nastiest, most dishonest, ouright lying group of numb nuts the political arena has seen. So, I return that with a whiff of exaggeration when making a conservative point...just to be able to survive in today's polluted political environment.

I could have given false answers for 10 bucks, just send it to the franchise tax board in kalifornia, they take it all anyway.

"opposition" because all too many view this as similar to team sports, well I'm on team America I guess.