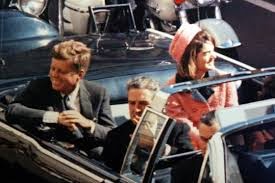 11:15AM Pacific Time, 22 November, 1963...a Friday.  We were in typing class, breathing easy...the rest of this school day was a breeze.  Typing class, lunch, then Phys Ed, French II, then home for the weekend.  Next week, a short week because of Thanksgiving.

Then the squawk of loudspeaker and the sad and somber voice of our high school principal.  Boys and Girls, we have just learned that President Kennedy has been shot in Dallas.  You are to go home.  For those of you who use the bus, we have ordered them up and are available curbside on the east side of the school.

We all just sat there, no one moving to leave.  We didn't know then our young President was already dead, half of his brains splattered over the back seat of the Presidential limo.  So we went home and turned on the TV and watched Uncle Walter explain it all to us.  Within minutes of arriving home, Uncle Walter, removing his glasses, looked down for a moment to compose himself, then looked into the camera and told us our President was dead, just one subtle sob in the throat as he announced it.

Americans were stunned.  All of America.  For the next four days we would sit, day and night, glued to the television set, wanting not to believe that our young, vigorous, handsome President was taken from us at such a tragically young age.

We did not know then that John Kennedy was a womanizer.  We did not know how very sick he was; with Addison's disease, Cushing's disease, that, before doctors at Parkland hospital could treat his wounds, they had to remove a canvas corset that kept him upright and mobile.

We only knew of the handsome young man with the ready smile, the thick shock of auburn hair that he had to keep brushing back from his eyes, the man whose elegance rivaled that of a matinee idol, a Cary Grant, an active man who, despite all of his injuries continued the weekends of sailing and touch football at Hyannisport.  The man who only a year before had stared down Kruschev with the Cuban Missile Crisis.

It was a mere thousand days ago when this young President took the oath of office and challenged Americans to "ask not what your country can do for you ask what you can do for your country"And the young responded.  When Kennedy created the Peace Corp he formed an army of charitable Americans who would teach health and hygiene in an African tribe, who would teach peasants how to plant food for bigger yields, who told the story of America's birth, to democracy's birth by the light of a thousand village fires.

He was the first President born in the 20th century and we delighted in his youth, his beautiful and intelligent wife and his lovely children.  We were tired of old men in the oval office; tired of a depression weary, war weary Franklin Roosevelt, of a good but rough as a cob Harry Truman, tired of "liking Ike" as a three pack a day of unfiltered Camels sent him to the hospital every couple of years with heart trouble.

The year Kennedy was elected President a new show on Broadway opened.  It was called Camelot and it offered the dream of a more just society, where "right makes might" and not the other way around.  And John Kennedy shared that dream; to lift up the poor, to expand civil rights for Negroes...and with respect to civil rights, he had hoped to achieve it on his time schedule...but Mississippi and Alabama would force his hand...and in the end he stood up and did the right thing.

He loved that play, and he loved that music, and his aides said they would hear the soundtrack of Camelot being played in the Oval Office as he worked late into the night.

And his dreams, and our dreams were shattered on that sunny noon in Dealy Plaza when a minor lunatic took the life of our President and and our dreams along with him.    Times being what they were we did not know of Kennedy's "sins".  And so we hefted him on a pedestal perhaps higher than he deserved...but we needed to mourn his loss in our own way.

And so, four days later, as the horse drawn wagon carried the body of John Kennedy to his resting place at Arlington, as little John-John held his mother's hand and saluted the coffin of his daddy, we cried tears that simply would not stop, even as we were not surprised...for everything about the Kennedys was magical.

Ironic, but the most revered President of our generation, a Democrat, he could never even win his party's nomination today.  He believed in a strong military, was a war hero himself, believed in cutting taxes to spur economic growth, was deathly afraid of incurring a national debt, and believed in giving a hand up and not a hand out.

In Kennedy's stead we inherited a Texas bully boy, a twangy talking Texan who had harassed, threatened and robbed ballot boxes to win his previous elections; a man with a huge inferiority complex who sought to buy love through the dispensing of tens of billions of our tax dollars, a man so desperate to be loved like JFK that he would pass the budget busting Great Society Programs, then boast to his House Speaker that "we've just bought the nigger vote for the next hundred years"...and to our great regret, he was right.

Johnny, we hardly knew ye...it's not so important that you weren't who we thought you were...it was enough that you set us to dreaming...of an end to poverty, of equal rights for everyone of every race, of flights to the moon...and of an American Camelot where "right will always make might".
Posted by A Modest Scribler at 2:00 AM

As the closet "liberal" in this gallery I (again!) find myself in agreement with you! I was just 17 when our President was shot and all of those dreams vanished with a single bullet. Please, I hope, the Republicans will choose a more viable candidate this next time around! I could vote for a Republican the likes of JFK, someone uplifting and inspiring.

To this day, hearing the testimonials on TV, and reading various articles including your blog, I am taken back to that day, and fight the tears forming in my eyes. I, too, remember where I was (third grade class at St. Leo School, when we were sent home with the same announcement that sent children across the country home:"The President has been shot." Not only would he not be electable as a Democrat today, he most likely would be vilified by the left. He, like all of us, had his faults, but those faults were overshadowed by his vision. And that vision is what we remember.

It is sad for our country that JFK was assassinated but unlike the rest of the country, I hold a contrary opinion. I have no use for anyone by the name of Kennedy. From the gangster father, to the son who brought us Vietnam and who also brought us the the man who brought us the Great Society, thereby "sewing up the nigger vote for the next 100 years" He had to know who Johnson was just as he knew Eisenhower laid out the plans for the botched Bay of Pigs. For only a 1000 day presidency he did an awful lot to effect this country very negatively for a long time. What is really scary is that he is touted to be what a great republican would be today. It really is odd to me how a guy who's family has so many underworld connections and are known to exploit those ties to get ahead would enjoy a reputation held only by the Saints. My own Mother spoke of him like he was Jesus reborn. Good riddance to all of them.