Obama Eliminated: "Dancing With The Czars" 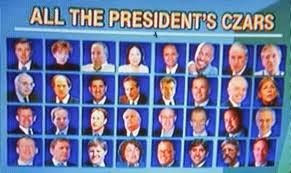 The first chapter of the Community Organizer's Handbook outlines the first step in addressing a problem....form a committee, fund it, spend two years walking around the problem, then when no solutions have been found, form a subcommittee.

Barack Hussein Obama (will we someday look back and recoil at hearing that name?) has taken that approach to a whole new level when he became President.  Obama seems to have lifted entire sections of  Hitler's "Mein Kamph" and Karl Marx' "The Communist Manifesto" in order to establish a huge group of Czars to circumvent Congress and dictate governance from the Executive Branch.

Alas, Obama's first Socialist 5-Year Plan has failed miserably.  Just as those old Soviet bloc's 5 year plans were doomed at birth, so too has Obama's "Dancing With The Czars" plan failed miserably.

Many of them are long gone.  Black Socialist Van Jones was canned when he revealed the "grand plan" to kill off Whitey and establish a Black Socialist movement that would put a Black Panther at every polling station, with billy club, and a green check for every Black family.

Others died off and left or were found guilty, like Jones, of leaking information about Obama's plans for collectives and mandates and re-education camps for free marketers.

So can we really be surprised with the "big fail" of Czarist Kathleen Sebeillius, who heads up the Obamacare debacle?  She's managed to do what no other Czar even came close to doing; uniting Congressional Democrats and Republicans against the Obamacare disaster.    That mess is likely to suck trillions out of the economy and costs taxpayers tens of billions of dollars, just to bring things back to "square one".

Earlier we witnessed the collapse of the "state run energy plan" as Obama forked out at least a trillion dollars in failed solar companies and exploding batteries.

When the dust from the General Motors bailout finally settled taxpayers ended up losing $30 billion dollars so Obama's transportation czar has been in hiding since last Christmas.

Obama's Treasury Czar is now kaput and his Fed Chief is out shortly after Auld Lang Sine is played and the ball in Times Square drops next year, having pumped $70 billion dollars of freshly printed greenbacks into the economy every month, only to see it plug along at one third the growth rate that Reagan achieved by just getting the government out of the way.

Then, just yesterday, Obama and his Energy Czar announced they are withdrawing the higher ethanol mandates as they learned, too late, that America was eating iher seed corn, fowling 21st century vehicle engines, fowling the ground water with pesticides from 5 million acres of land, previously in conservation reserve,  and wasting billions propping up a dysfunctional ethanol industry.

Whew!  So, now America is speaking out...Obama has pretty well been written off, eliminated from "Dancing With The Czars" and is now just waiting to see his point totals through the eyes of historians.  It ain't looking good!

P.S.  I would like to credit my FB friend and Blog follower Ed Jenkins for giving me the title for this blog, and the inspiration to write it.

I turned a phrase. You turned out an excellent post. Bravo!

Thanks so much Ed...coming from you that means a lot.