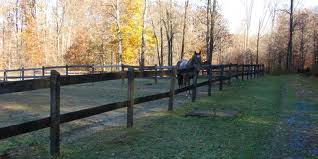 My daughter and her family moved this past week; from a bucolic little community in Pennsylvania to Florida.  Her husband's employment necessitated the move.  I believe I'm almost as sad as they are at leaving a home where my daughter and granddaughters did a lot of growing up.  They lived on a little horse farm surrounded by pockets of wonder; open fields and forested thickets and serene tree-lined country roads.  No fast food joints or gas stations or Walmarts to spoil the view.  One could sit on their back veranda and look out on green pastures and still imagine the Swedes and Pennsylvania Dutch plowing through the black soil to yield the October harvests.  If one wished to mingle with the common folk one could drive west a few miles, to the little village that housed a little deli, an ice cream shop and a candle store.  Not far to the East, George Washington wintered his troops and used the respite to bind up the wounds of bloody revolution.

When one tired of the serenity and peace of the little village one could "park and ride" the train into New York City to have a nice dinner and attend a Broadway play.  During one of my visits my daughter and son-in-law drove me into the grand city to do just that.  It was a magical moment that I'll always treasure.

Now my lovelies are busy at making new lives in a new place.  Like strangers at a party they are feeling their way around their new environs, smiling at strangers, trying not to spill their punch, tromping threw the storms of change that life always demands.  I feel almost traitorous as I sit in the shelter of the old and the familiar as my dear ones, like the pioneers of old, attempt to settle in and make the new and unfamiliar, a place to call "home".

But my daughter is a marvelous creature; she bears within her DNA the vestiges of a grandmother who also ferried a family from pillar to post, yet always made the new place a "home".  Before long she will have cast a critical eye on the new school and will deem it acceptable or not.  She will have found the best grocery store, the nearest Target, the best place to score fresh fruit and veggies...and yes, the nearest Starbucks.

God willing I'll visit them all soon.  Being a curmudgeon I'll no doubt bitch about the heat, the plethora of "yuppies" (those class of folks who define success by the quantity of what they own, and place 'appearance' above the 'real').  But I know that home will be filled with squeals of laughter from a little girl just discovering the joy of living, the home will offer soft seats and soft hearts.  The coffee pot will always be full and I'll always be welcomed.

For now, I imagine all is chaos.  My lovelies are digging through boxes to find the coffee mugs and the TV remote and "you would think, for a home at this price, those people would have left the toilet rolls!"

I've been there and done that.  When one serves 22 years in the Air Force you learn to pick up everything and haul it somewhere else and start your life all over again.  And you do it every two or three years.  My daughter is an Air Force brat so she knows the ropes as well.

Home is where the heart is....and a little of mine is with her family this morning.  May the Palm trees sway, may the alligators already have had their breakfast and may the mosquitoes feast on the neighbors instead.  ;)

It's funny that you wrote this today, because yesterday as I was unpacking, I came across a coffee mug that you gave me on my 18th birthday. It's a picture of a little house and it says "Home is where our feet may leave but not our hearts." it's still my favorite coffee mug and it brought me a moment of peace in the midst of all this chaos. I love you Dad. We can't wait for you to come and visit.

Love you too, babe. Kisses for all my girls.

I just love to read your stories brother,, I always feel like I'm right there looking off that veranda with you! Good luck Crystal and I love you both! <3

Thank you sweetie. I hope you're having a wonderful Sunday morning. I love you too.