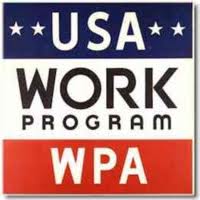 During the Great Depression a huge swath of America was unemployed.   Nearly 30% of American workers stood idle, having lost their jobs or their farms.  As part of Roosevelt's New Deal program the Works Progress Administration (later called the Works Projects Administration) was established to provide jobs to some 20 million workers.  This program alone accounted for nearly 8% of America's GDP in 1935 and most economists will tell you that the program was a huge waste of taxpayer dollars. It was probably the first indication that modern governments simply cannot manage a large government program without incurring massive fraud, waste and abuse.

Never the less, I have to admire many of the good intentions of the WPA.  At a time when Americans were desolate, impoverished and without hope, Roosevelt gave them something to do.  Fortunately, unlike today when so many of us have come to expect a government check in the mail, Americans wanted to work to earn their check.

The WPA sent young men out into our nation's forests to build logging roads and thin our forest lands.  WPA workers built libraries and city halls and bridges and highways.  They brought electricity to rural villages in the Appalachians.  This "busy work" proved to be far more than that;  these workers were building America's infrastructure, and they were doing it for $100 dollars per month!

But some wise person, somewhere in the Roosevelt Administration, considered that man does not live by bread alone, that rebuilding America was more than concrete and wood and asphalt.  That it was vital that culture and the arts must also be championed.  Two of those programs that are dear to my heart are the Federal Arts Project and the Federal Writers Project.  The Arts Project employed our nation's artists in capturing the grandness of America, both her natural beauty and her people.  I've seen paintings of the Grand Tetons and the Grand Canyon and portraits of Okies migrating West and they are marvelous.  The Federal Writers Program was no less grand.  Several years ago I was peering through an array of old books in a used book store.  I came across a book that documented the entire history and geology of the state of California.  The book was wonderful in its detail and the writing was superb.  I later came to learn that the Federal Writers Project employed some of our finest (and unemployed) writers to write the history of each of the 48 states.  Writers also gave us perhaps our last opportunity to capture a glimpse of the previous century as they also conducted interviews with former slaves and Civil War Soldiers.  These books are now treasured by readers who come across one of them.    Such  literary luminaries as John Steinbeck, John Cheever,
Ralph Ellison, Nelson Algren and Saul Bellow participated in these projects!

So, to the numbers crunchers who cite the massive waste intrinsic to the WPA, I have to agree.  But, for  those of us who feel enriched by the many enduring works of that era, I say, at least some good came from that program.  It kept Americans busy, it gave them hope and it restored to them the pride inherit in building something lasting.  I challenge any of you to walk around your town and take a good look at your libraries and bridges and municipal buildings.  You're sure to find something that was built by those WPA workers.

I would love to see our current government employ our lost souls drawing a welfare or unemployment check toward building something for the community good, whether it be working in a day care center, helping out in the classroom, cleaning community parks or restoring older homes.  Sadly, the days of "giving" for "receiving" is no longer part of our cultural ethics.