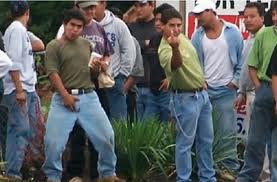 Yesterday both the Border Patrol and ICE officials announced that they have been instructed by the Obama/Holder/Napolitano regime to cease and desist from checking illegal aliens.  Union reps from both organizations held a press conference yesterday to announce that they have been told not to check the immigration status of anyone...and to simply take the word of the illegal alien that he graduated high school here and that he's a "dreamer".

Both ICE and the Border Patrol said "if we're not able to check on immigration status, what is the purpose of having any immigration laws at all?  They further gave examples of felony criminals who were allowed to go free after Obama gave them a free pass.

Isn't that just wonderful?  I imagine tens of thousands of illegal Mexicans are at this very moment packing their bags down in central Mexico and heading for the U.S. border.  As long as this further enhances Obama's electoral support with Hispanics he's more than happy to sell out America.

Read it for yourself!  I can't make this stuff up...it's just too bizarre!

you guys are so full of shit, no one ordered any such thing. I am a republican and a border agent in San Diego.

You're not a Republican, you're not a border agent....and you were too damn lazy to read the frickin news link...that means you're the typical liberal snot nose that refuses to even confront facts.

You tell 'em JCS. I just watched the you tube vid of the ICE, Border Patrol, and a senator all telling of their disgust with it all. If the numbskull troll that won't reveal him/her self would like to see the video the link is below.
Now tell me why I need to continue to obey any laws whatsoever. To hell with Washington.
Keep up your good work. I have put your site out there. Don't know what good it does. My friends and family are just as apathetic as the rest of this nation. I'll keep trying. I hope you do too. I would miss reading your posts.

Thanks Ken. Good luck in spreading the word. It took a couple of years for the colonists to get behind the first Revolution; it may take at least that long for the second.

My God. This guy is so far above and beyond your typical
dirty politician.
I'm seriously worried about what another 4 years with this
guy in office would do to our country. Very very scary.
I'm sure you're correct that they're packing their bags
and getting ready to make the border run, but it also
makes me wonder who ELSE is too.

Thanks for the comments, anon. Well, you can't say Obama hasn't established some formidable battle lines...they don't mesh with most of America, but then Obama has never cared much for traditional American values. If re-elected he won't stop until he's established an open doors nation and structured much like socialist Europe.
He'll never admit it but he detests America and all we stand for.

I just came across this story (link below). Very sad commentary on our times. I only wish the pig obama would have been there to face this vet hear what he had to say!

Ken, re the vet's comments on VA care. I have 22 years of service but don't even qualify for VA medical care. In 1996 Clinton put "means testing" for the VA. Anyone making over $25 grand a year was not eligible.

I have used Tricare during my retirement years but now Obama has plans to triple my premiums as part of the defense cuts....all the while doling out free medicaid to 30 million more folks who didn't see fit to serve in the military or, indeed, even work and pay taxes.