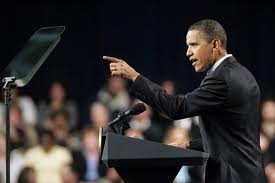 Yesterday CBS/NPR host Charlie Rose interviewed President Obama.  As usual, all the softball questions were asked and answered.  Perhaps the softest was "Mr. President, what do you see as your biggest weakness?".  Obama first smirked, then postured with a intensely concerned look on his face, then said, "I've come to learn that it's not just getting policy right"..."I don't think I've done enough "storytelling".

At that I almost choked on my meatloaf.  Is there anyone on the planet that thinks Obama needs to have made a few more speeches?  First of all, when you count all those Rose Garden speeches, the press conferences and the thousands of speeches he has uttered over the past 3 and one half years how could anyone come to the conclusion that the Anointed One has not done enough "storytelling".  Secondly, Obama has been in campaign mode for his entire Presidency, which leaves little time to lead.  Accordingly, he allowed Reid and Pelosi to drive the liberal agenda as he played golf, vacationed at Martha's Vinyard or Hawaii and flitted around the country making political speeches!  He usually hangs around Washington just long enough to sign a liberal bill and get another photo op.

No Mr. President, your weakness is not failing to make enough speeches or "storytelling" as you call it.  Your weakness is that you constantly underestimate the intelligence of the American people as you assert "if they only understood what I'm doing, they'd support me".  Mr. President, has it ever occurred to you that it is you who don't understand?  We understand what you are doing and we damn well don't like it!

Let us add; we have had enough of your "storytelling"; the "storytelling that said Obamacare would reduce medical premiums even as they are going up 10% a year.  We are tired of your "storytelling" that if you spent a trillion dollars of taxpayer money in a pork-laden stimulus bill that you'd keep unemployment below 6%.  We've been over 8 percent for your entire term.

Mr. President, you've done more than enough "storytelling"; we now have a "story" for you come November 6th.
Posted by A Modest Scribler at 3:00 AM

Great column BUT...Why is it that as much as everybody says they hate this president he STILL carries a lead in all the polls I see? I am praying he is unseated in November for I feel we are over if he wins. Counting on Americans to be smart anymore seems to be a thing of the past though. To quote a great author I have come to enjoy reading, "Sad, Damned Sad"

Ken, keep in mind that exactly half of all those who profess to hate Obama are also folks who are just mouth breathers and "drugstore cowboys"...they never go out and back up their digest by going to the voting booth. Also, keep in mind that we have are now at a critical 'tipping point' where half of America is getting a check and Obama and liberals buy their power with those checks. I am currently working on a blog where I say that, if Obama is elected, look for a Civil War within ten years.
I don't think I'm exaggerating by saying that this election is crucial and will answer one critical question: Are there enough of us left that honor hard work, traditional values, contract law and our nation's laws. We'll see.