"Daron Sutton Has Been Bery, Bery, Good To Me" 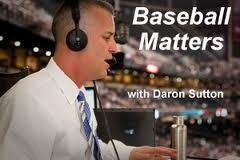 Last April and again a couple of weeks ago I wrote blog entries on Daron Sutton, the suspended Arizona Diamondbacks play by play baseball announcer .  In last year's blog I decried Sutton's "too formal" speaking style for calling a baseball game.  I also politely asked him to dial down his manic screams when announcing a home run in the 8th inning when the home team is losing by half a dozen runs.  None of that is the point of concern today.

In 18 months I've probably written five blogs on the subject of baseball.  The majority of my blogs concern illegal immigration, the horrid national debt, the breakdown of contract law under Obama, the lack of courage and conviction of our liberal elites, etc.   However, it would seem that many of you are far more concerned about a sub-par baseball announcer than you are about our country going into the toilet.

Those interested in Daron Sutton have been googling "Daron Sutton" and are led to my blog because the Arizona Diamondbacks are being frugal in releasing any further information after announcing his suspension.  Ole Daron is rapidly climbing my "most read" blog list these last weeks.  Oh, he hasn't begun to penetrate the 4,000 plus page views I received for "The Late Great State of California", about that states complete surrender to the illegal invasion, but he's certainly getting his share of attention at my blog site.

I guess I shouldn't complain; a page view is a page view, after all.  Perhaps I should paraphrase Sammy Sosa's old saw "Baseball has been bery, bery good to me".  But, I'm not.  I would be far more satisfied if Americans were paying more attention to their government than they are to baseball announcer.

Perhaps if I copied ole Daron's style and scream about it a bit louder I might get the attention of an apathetic America.

Sad, Damned Sad.
Posted by A Modest Scribler at 3:00 AM

As a hard core Dbacks fan I loved listening to Sutt's 'manic screams'. It really shows a sense of pride when watching your hometown team on local television. He and Mark Grace were truly the most entertaining duo on the air. I am optimistic, so I do hope to see them call a Dbacks game once again.