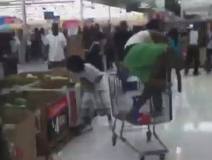 A couple of months ago when Trayvon Martin was shot Al Sharpton jumped on a plane and headed for Florida to lead a march against the "White Hispanic" that shot him.  That same week Barack Obama trotted out to the Rose Garden and said "If I had a son, he'd look like Trayvon".

On July 16th 300 Black thugs "flash mobbed" a Walmart store in Jacksonville, Florida.  They destroyed the security system, tossed merchandise all over the store and stole thousands of dollars of merchandise.

I haven't heard a word from Obama and Sharpton.  Are these also "your" kids?  If they are you're not doing a very good job in parenting.

For three years now we've seen an explosion of these Black "flash mobs" all over the U.S.  Chancing safety in numbers they enter a convenience store or a retail store in large numbers, then steal and plunder.  I've never heard Sharpton or Obama condemn this behavior.  Rather, I hear both lament the tragedy of Black poverty and poor education and offer the idea that we must throw more money to these thugs.

The real tragedy is this Black thuggery is fostered by liberal government programs that provide welfare and food stamps to three generations of Blacks who absolutely refuse to get a job and support themselves.

But what else can Obama or Sharpton do?  They derive their power by providing easy excuses for ignorance and a pursuing a gangsta lifestyle.

A 2nd Civil War is brewing as Americans are losing their patience with thugs and deadbeats living off their hard earned tax dollars.
Posted by A Modest Scribler at 7:03 AM

wow, really? so the only people on food stamps are blacks? b/c that seems to be the opinion here. not all blacks are thugs, just like not all whites are racists.

Joanna, you didn't succeed in opposing my point of view. Of course there are white thugs..and they get pounded pretty good. But Blacks can't have it both ways; they can't use the excuse that government isn't doing enough for them while they do nothing for themselves.

Also, the hypocrisy of Sharpton and Obama lamenting a "wrong" committed against a black, while failing to condemn black thug behavior is astounding!

I'll take that notion one step further! I don't hear the black community condemning this behavior! Except for Bill Cosby and Thomas Sowell, the Black community seems always willing to give their thugs a pass.

And...where's Obama and Sharpton when 17 people are shot and killed on Chicago's south side in a single weekend? Haven't heard a word from either of them!