Pride In The Dust 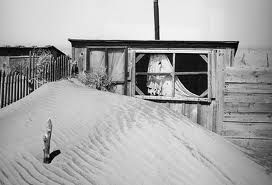 In the 1930's the Midwest began experiencing severe dust storms.  Farmers, not following soil erosion prevention practices, suffered the loss of millions of tons of top soil over a thousand mile span of Middle America.  On April 14th 1935, Black Friday, a storm of storms rolled across the prairies and buried the lives of the last holdouts.

The other day I was watching American Experience on PBS.  This episode was called "Surviving The Dust Bowl".  Survivors of this tragedy offered testimonials of the time.  As part of a family of Okies myself I was drawn like a bee to honey to these folks as they spoke in the language of my family.

They told tales of bank foreclosures and the day to day travails of trying to put a meal on the table.  They lamented the loss of a farm that had been in their family for generations.  They prayed to God and they prayed for rain.

What struck me about these people was the sense of guilt they felt for having failed, as if they ought to have been strong enough to fight even the harshest that mother nature could throw at them.  One old fella's story led me to tears.  He told about his Dad struggling to keep his family fed.  One day a government agent came around and told him that President Roosevelt had begun a relief program that would have the government help the farmers out with a few dollars a month and maybe a box of flour  and cooking oil.  That old farmer was amazed that anyone would offer him something that he hadn't earned.  His pride was such that he just couldn't see living off the charity of the taxpayer...and he refused the government offer.  He was just one of thousands who likewise refused Roosevelt's offer.

As I watched the man's son, his throat constricted, speak about a father's pride more than 60 years ago I was struck by the contrast of Americans then, and of so many today.  That farmer of long ago had been bred by multiple generations of Americans who had braved poverty and hardship in the building of a mighty empire.  Neither nature, nor need, nor abject poverty could rob them of their pride.

Today, when American poverty is defined by having only one large screen television, only one cell phone and only one late model car, where half of America pays not a dime of income tax, and half of America collects some form of government check, where a plethora of minimum wage jobs are below their class, their exists a dearth of pride....and a willingness to take what you can get, whether earned or not.

It seems to me that pride was lost in the dust somewhere along the way....these days we are far more likely to burst forth with the crocodile tears and, rather than picking ourselves up from our bootstraps, we curse those who do.

I wonder who's worse off; those farmers drowning in the dust bowl....or those today who drown themselves in false pity.

This isn't related to your column, but I thought you might find this article interesting. I couldn't use your email. Conservatives need more bloggers like yourself here.
Thanks