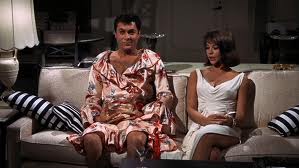 Yesterday Turner Classic Movies was showing the 60's era flick "Sex and The Single Girl".  Produced to capitalize on Helen Gurley Brown's best selling book of that era, the film was a comedy and absolutely no graphic sex was shown.  Yet, there is one scene in that movie that I consider one of the most erotic scenes I've ever seen on screen.  Tony Curtis, pretending to be a patient, is attempting to seduce Natalie Wood, a therapist.  Without a single grope, without a single attempt at nudity, the two actors are able to gin up some serious heat, just with gesture, facial expression, tone of voice, and breathing patterns.  Wow!

In Hitchcock's "North By Northwest" watch the verbal foreplay between Cary Grant and Eva Marie Saint in the club car of the train bound for New York.  Pure magic!

In "Charade"the lovely Audrey Hepburn spends much of the film trying to seduce an older Cary Grant.   She uses her beauty and those dancing almond eyes to lure him in.  During one moment of Grant's resisting Hepburn, frustrated, says to Grant "you know what's wrong with you?"..."what", grunts Grant.  "Absolutely nothing!", she purrs.  Movie magic!

Frank Capra's "It's A Wonderful Life".  About half way through the movie, Jimmy Stewart, after having his dreams of adventure and a new career dashed repeatedly by life's circumstances, has dropped by Donna Reed's home.  Reed's character is deeply in love with Stewart.  She is longing for him to make his move and commit to her.  He's so attracted to Reed that he can't think straight but knows if he succumbs he'll be stuck in Bedford Falls for the rest of his life.  They are sparring in the parlor when a out of town caller interrupts the conversation.  The caller wants to speak to both of them so they move close to each other, each leaning an ear toward the ear piece.  As they talk to the caller there are all kinds of physical things happening to them, totally apart from the conversation.  Finally, Stewart slams the phone down, grabs Reed by the arms, jerks her violently to him and protests again his need to get away and not be tied down to her, even by love...Reed bursts into tears and Jimmy puts a kiss on her that is somehow both brutal but needy and tender, all at the same time...next scene...the two are married.  Erotica in the most unlikely place, while Mother is watching from the top of the staircase!

hi Ken. You never know what I'll write about next. Actually, sometimes something just kicks around in my brain, unknowing to me and simmers. The Natalie Wood flick shown on TCM yesterday had prompted me to thinking about that scene, which I had seen many, many times. Then, last night, I went to bed and was just about to drift off when I remembered that scene and it wouldn't let me sleep. Unwillingly I started writing the blog in my head and it sounded like a good one...I then had to get up, go to my desk, jot down a note to myself for this morning so as not to forget. I then went back to bed and got to sleep right away having felt assured that I'd write it in the morning.
Soylent green was a sad and depressing one indeed! The only good thing about that movie was Leigh Taylor Young whom I consider one of lushest, sexiest woman I've ever seen in my life.
Thanks for visiting.

P.S. i agree with your old girlfriend.