Why Is Obama So Angry These Days? 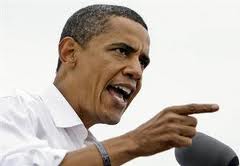 Somebody needs to tell President Obama to dial back the "angry militant black" posture he's been presenting for the last few weeks.  He looks almost exactly like those Black Panthers wielding clubs in front of that polling station in 2008.    That's not a good sell if he hopes to have any chance of victory in November; after all, it was Obama himself who promised to bring a new degree of civility and transparency to Washington D.C.  For that promise, Obama was able to elicit support from a large portion of those Independent voters who got him elected.  Now that he has failed to deliver on that promise he seems to have reverted to the Black militancy that drew crowds to him in Harvard Square a decade and a half ago.  While that militancy may play well to 20 somethings who've never had to meet a payroll, or scrape up the dough to pay their tax bill, it certainly doesn't sit well with a hurting middle America.

I'm wondering what in the hell Obama has to be so angry about.  He largely got what he wanted from the Supreme Court on immigration.  That decision largely ties the hands of all state law enforcement agencies in enforcing our immigration laws, thus securing Obama's Open Border/Amnesty program for somewhere between 12 and 30 million illegal invaders.  Too, Obama was able to intimidate the Chief Justice of the Court sufficiently for Chief John Roberts to re-write the Obamacare appeal and secure a Socialized Health Care system for generations to come.  Even the Eric Holder problem and "Fast and Furious" went away as soon as Obama declared "executive privilege" to make sure the Obama/Napolitano/Holder bumblings never saw the light of day.  Brian Terry's parents will just have to wait a few more years to find out why their son was killed by a federal gun-running operation.

Someone needs to tell Obama that it's the American people who are...and should be angry.  We continue to suffer from a depressed housing market, 15% real unemployment and steadily rising costs of food, gas, government fees and health care.

Perhaps Obama is frustrated with the polls which continue to show an erosion of support as November gets ever closer.  Perhaps the Annointed One is upset that he no longer enjoys the unanimous cult worship that he so desperately aspires too.  I don't know the answer but those sneers, jowly snarls and angry black man poses do him little good in Iowa and Ohio and Eastern Pennsylvania.

Perhaps he'd be better off returning to his beloved corrupted metropolis of Chicago in November.  I hear he would fit right in with the hip-hop crowd on the South Side.