Obama Will Attack Iran If He's Losing in October 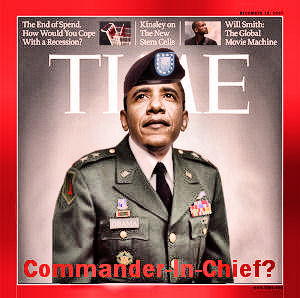 Barack Obama never served a day in the military.  In fact, he and his Columbia and Harvard Alumni loathe the idea of serving in uniform.  Neither will even allow an ROTC detachment on campus.

Nevertheless if Obama is losing in October he has one huge card to play; that card will be attacking Iran.  Obama knows how much play he got out of our troops taking out Osama Bin Laden.  Hell, the way Obama puffed out his chest you would have thought he was the first one out of the helicopter!
Imagine then, how easy it would be to marionette our troops out to the Persian Gulf to flay and slay a few Iranians just about the middle of October.  Oh sure, he'll have all kinds of justifications all lined up to back his play.

Never mind that Obama refused to back the Iranian freedom-fighters who took to the streets three years ago in an effort to overthrow the Imams.  Never mind that Obama sent emissaries to Israel to tell them to back off any plans to attack Iran before they get their Nuclear Reactors going.  Obama won't allow it; he wants to save that precious card for himself, just in case America wakes up, rejects his honeyed rhetoric and decides their chances for a job sound better under Romney.

If the Anointed One is losing in the polls come October look for Obama to develop a set of gonads and mount air strikes against Iran.  There's nothing like a warring conflict to give the Commander in Chief a bump in the polls, however temporary.  Hell, he only needs to pump up his vote count long enough to get through November 6th.

Don't believe Obama would do it?  You better take a close look at how this "emperor prince" has issued edicts and executive orders to get his way.  This is a politician who learned his trade in Chicago, land of the dead and bought voter.   He'll have no qualms sacrificing a few American troops to achieve a second term.

UPDATE:  Wonder of Wonder, even more evidence that Obama has got his "war arrow" all ready just in case he's down in the polls.    http://news.yahoo.com/obama-aide-tells-israel-iran-attack-plan-paper-061444925.html

Note to Readers:  If you believe this blog serves a purpose, if you believe it lends a bit of rational sanity to some of the national insanity, I urge you to sign up as a follower and subscribe to it by email, in the "subscribe to" box on this page.  There is no cost or charge to subscribe to this blog.  If I do not see an increase in interested subscribers I will end this blog sometime in the coming months.  Thanks.
Posted by A Modest Scribler at 3:00 AM

While not out of the question, I doubt Obama would do this. Even his most ardent supporters would have to scratch their heads and ask "Why?". It would scream desperation and might not work, militarily. The Iranians have learned from what happened in Iraq in 1981 (Osiariak) and have disbursed their nuclear facilities to several locations. For a guy who railed against the war in Iraq, starting a fight in Iran would just be stupid.

Randy, I can think of a number of "build-up" scenarios that are totally credible! Because we should have attacked those nuclear reactors years ago, Obama simply says 'we have tried negotiation, we have tried diplomacy, we have tried economic sanctions...and nothing has worked my fellow American..accordingly, I ordered air strikes against Iran as of 0500 hundred this morning...
Don't doubt it. If Obama is behind in the polls he'll do it! In the early stages of a conflict America has never failed to rally to their Commander in Chief and that's worth ten points in the polls instantly. Watch and wait!