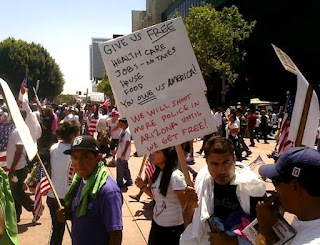 Well, as I warned months ago, once a liberal get his nose under the tent, all is lost.  It is bad enough that we must battle Obama as he robs retirees and taxpayers to pay for another 35 million freeloaders wishing free health care.  Now there is an effort afoot to expand ObamaCare to pay for the nearly 30 million illegal aliens in the U.S.  The above link outlines their strategy.

Illegals now get free medical care in our emergency rooms.  Under ObamaCare HR3200 intentionally omitted any requirement to show proof of immigration status before receiving routine medical care as well.  In fact Obama has already dispensed millions of dollars from Obamacare taxes to set up free medical clinics to accommodate health care for the illegal invaders.  This is not enough for illegals.  They are now demanding that the U.S. government guarantee their medical benefits in clear and specific legislation.

They plan to lobby Obama and the Democrats to provide free healthcare to the invaders by appealing for sympathy for the illegal farm workers.  Ms Valdez, the author of this report is particularly militant when it comes to promoting open borders and blanket amnesty.  She is employed and supported by the ultra-liberal Gannnet newspaper chain which owns our local newspaper (See my blog; Arizona Republic News; The New"Pravda").

In the coming weeks you can expected the militant group La Raza (The Race) to begin street marches in American cities in an effort to force political approval not only for blanket amnesty, but that they also be covered under ObamaCare with free medical care for life.

Hell, we already award free medical and dental to every anchor baby who is born here; I guess giving free health care to the illegal invaders is not that radical of a notion.

Expect Emperor Obama to issue another "decree" at any moment!

Anyone praying that November comes soon?

Yea I'm praying it comes soon.
I myself will be equipped with pepper spray this year, you
never know who'll be there "legally" trying to intimidate
my decision.
I wonder if there will be an "APP" that helps people
figure out how to vote? Otherwise it could be a slow
turnout this time around.