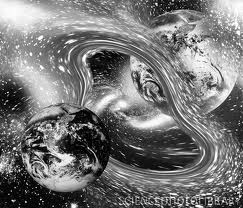 Okay, I just spent a few hours watching a PBS series on Quantum Physics.  Now, for you "Glee" and "America's Got Talent" people, this may not hold your interest.  You may want to leave now and go read about what Miley and Justin are doing.  But for me, this Quantum Physics thing had me glued to my seat, not so much because of the science, but because of what QP offers in the way of explaining the meaning of our existence and the strong indication that we indeed live on elsewhere once we depart our current world.  Sound far-fetched?  Not really.

If you could travel back, say 300 years, and try to explain microwaves or computer science or, hell, even the effects of bacteria in our environment, you'd find Isaac Newton, the smartest guy on the planet, baffled and disbelieving of what we now know.

Now, try to imagine what we still have to learn about our world, even in an age of accelerated discovery.  I offer this comparison because of some of the most baffling discoveries physicists have made just in the last 75 years....and what that may mean about the existence of a 'creator'..or whether there is life after death, and if there is, where we go to when life in this "dimension" is finally over!

Try to stay with me here, because I won't, and can't get too technical, nor will I get you bogged down in the intricacy of science.  However, to even discuss the possibility of parallel universes, and an afterlife, one has to, at least, understand why quantum physicists today are actually providing the means for understanding how parallel universes are possible, and even probable!

Remember Newton's theory on gravity?  Remember your science lessons about Maxwell's advances in explaining electro magnetism?  Remember Einstein's E=MC2?  All of those smart guys helped to explain some of the basic tenets of science, and how our world operates.  They all offered predictable "reactions" for every "action".  We had a better understanding of how our planet interacted with other forces in the universe and this led to great advances across the entire field of discovery.  This was all solid science at the level of the atom.

Then something amazing happened!  Scientists in the 1920's and 1930's began to go inside the atom and discovered protons and neutrons.  But, more importantly these new scientists began to examine what was happening inside the atom!  They found that there were many chaotic and unpredictable "reactions" for every "action".  STAY WITH ME FOLKS!

These new sub atomic discoveries eventually, over the next century, led to the study of quantum physics and the "string" theory.  Again, I'm not going to bog you down in physics; suffice it to say that quantum physicists have now confirmed that the laws of physics, at the sub atomic level, is extremely chaotic and unpredictable, and that we are essentially, at this moment, blind to other dimensions that exist parallel to the "plain" we are currently occupying!  What does that mean to us, the "Joe Blows" of life?  Well, now physicists are saying that "alternate dimensions" are not only possible, but are very likely "probable".  In other words, it is very likely that we mortals, upon departure from this physical world, are very likely transported to another physical dimension, a world parallel to the one we are now accustomed to occupying.

What does all this mean?  Well, let's go back to my first paragraph.  If Isaac Newton was indeed the most brilliant man of his time, and knew far less than today's 6th grade science student, imagine what we don't yet know about our world (or worlds).  Our Quantum Physicists have opened the door a crack; they've proven the likelihood that parallel worlds most likely do exist.  They even go as far as to propose the possibility of time travel (another dimension) and that "matter" (Us!) in some form, lives on beyond the grave.

I find all of this fascinating, especially with regard to how physics and spirituality meshes with the age old belief in our divine creator.  In an age of ever-increasing skepticism about God, wouldn't it be interesting for those who worship science over religion come to learn that the two are not mutually exclusive?

By the way, I just checked Amazon to see what is being said of Quantum Physics on spirituality, religion and alternate dimensions.  There are no less than 296 books available, many offered jointly by religious and science experts.  I guess I'm late in learning about this after all!

While I've written before of having communication with my loved ones who have passed on, and believe deeply in an afterlife, I'm pretty sure "heaven" is not streets paved with gold.  However, I do believe we do indeed have a "creator" and I wouldn't be at all surprised to learn that my loved ones who've passed may indeed by just a quantum leap away...and very near indeed!

"With 99% certainty the "Higgs boson" has been found", otherwise the God particle, that coming from the scientists at a collider in Sweden, it's interesting that they call it that. Loved your column here, you have a great knack at reminding us all that there is hope. thanks

Ken, I worked on this one for a long time and still did not do a very good job on it. I guess if I were to throw out all of the current religious dogma and all of our science I would still be left with this:

Just as the Greek philosophers offered that somewhere deep within in us there exists a tiny slice of perfection (a God particle), or at least an innate recognition of perfection, then God, or our creator, exists within each of us; it is that inbred recognition of what is moral, what is right and what is wrong. It's not the learned morals taught to us by our society, but something far deeper. That little slice of "god" or "heaven" is our soul, and I believe the soul is immortal. Having received clear messages from my loved ones who passed I am 100% certain that they (or their soul) lives on even beyond our death in this world.
I would never presume to know a thing about the afterlife dimension they journey to; I only know they are there.
The intriguing thing about Quantum Science is that it provides evidence of a pathway to that alternate dimension.
If you have ever read my earlier blog about the cell phone, music box sounds emanating from a device totally incapable of producing those sounds...and if you believe I am credible, you would understand how firmly I believe that we're not done when we're done here!
Thanks again for reading...and for taking the time to comment.