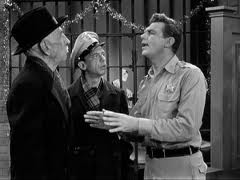 Mayberry is mourning this morning.  The humane Sheriff who let moonshiners out of jail to go and get their crops in is gone.  The small town law enforcer who delivered babies, kept Barney in check and often took the afternoon off to take Opie fishing has turned in his badge.

When I was a kid I attended my Boy Scout meetings on Tuesday nights, then ran home after, to make sure I didn't miss a minute of The Andy Griffith Show.  Having no father at home myself, Andy served as my surrogate dad.  When he told Opie that the pain of an ass-whooping was better than the pain of surrendering your milk money...and your pride, I listened.  When Opie talked of running away from home Andy didn't yell and stomp and demand; instead he told Opie how hard the road would be and how much he and Aunt Bea would miss him.  Opie stayed.  When Opie killed that mother bird Andy didn't raise his voice; he simply took Opie upstairs and pointed out the window at the baby bird in the nest...that was all Opie needed to see.  When Opie claimed a tin man who wore a strange utility belt and hung out in trees Andy trusted him enough to believe him.

Andy was a Sheriff who wore no gun.  He chose instead to keep the peace with the devices of love and respect for his fellow man.  He was so attuned to human motivation that he could "arrest" a Scrooge-like man at Christmas, drawing him from the darkness into the warm circle of family and friends.

Andy could have belittled Barney and made a fool of him every week of the year.  Instead he chose to let Barney learn from his mistake-prone life.  Time and again he showed Barney a degree of patience and of love seldom seen in life or on screen.

Andy Griffith was a man of many talents.  His first claim to fame was a comedy record called "What It Was, Was Football".  The sketch related what football would appear to be if someone who had never seen it played came out from a remote hicksville and had to describe it.  It was hilarious.  A testament to Griffith's talent, he said he wrote it in his mind while traveling by car to a second show where he didn't want to repeat the same performance on the same day.  Griffith then found acclaim on Broadway in "Destry Rides Again" and "No Time For Sergeants", which would succeed later as a movie.

Andy could have been one of America's finest dramatic actors.  All one need do is watch Elia Kazan's "A Face In The Crowd".  Griffith portrays a really nasty human being and commands the picture so dramatically that he seems to literally leap from the screen and into your lap.  Comparisons to Brando began to circulate in Hollywood after the film was released.

But, just about that time, Griffith was offered the TV role of a small town North Carolina sheriff.  He took it and the rest is history.  He surrendered the fame that might have come from the finest of dramatic performances in favor of being America's most beloved dad and friend...and sheriff.

I guess my favorite Andy episode was when Opie's teacher told Andy that Opie needed to do better in math.  Andy then began to think in real terms of Opie's future; he contemplated Opie failing to meet college grade standards, worried about not being able to pay for Opie's attendance at a university, and began to come down pretty hard on Opie to forego "play" and do his homework.  Then, Andy seemed to take a step back and allow his "heart" rather than his "head" to rule; you could see Andy's face soften, light up in the spirit of love and hug his son.  "You just do the best you can do, Op"..."that'll be fine with me.  Andy instinctively knew that being a little boy was important too!

That's all Sheriff Andy ever asked from anyone in Mayberry.  He recognized human frailties and chose not to harshly judge them.

Thank you for that tribute to one of my favorite TV heroes. To this day I enjoy Andy Griffith reruns, the black and white only. When they went to color something happened with the whole content of the show, even the morality changed, Andy would lose his patience frequently, people weren't as friendly, anyway the black and whites are best in my opinion. "Faces in the Crowd" was amazing. Hard to believe that's Andy from Mayberry in there.
I framed houses in a rural area of California for a couple of years. The job site was only about a half mile from home, so lunchtime found me and several other carpenters spending lunchtime in my living room with Andy Griffith and a couple cold beers. Funny picture, that one.
Thanks again, Andy left this country a better place.

Well written and spot on. TV back then was different. No foul language, no shock value programming, no sex, little violence, basically nothing like today. His show (and it was his show) taught a lesson in every episode. The good guys are leaving us now. Earnie Borgnine, Don Knotts, the list goes on. Well said.